Denon's new investment in a competitor to Sonos was yesterday demonstrated by Hi-Fi klubben. Audiophile.no was present in Bergen.

Denon's new multiromsystem Heos has been released some months ago, and now this system has landed in Norway. It's a pretty offensive strategy, where it shines through that Denon aims to challenge the hegemony that Sonos has been allowed to hold a surprisingly long time. And it is almost a law of nature that if one is to challenge the one standing atop the podium, one must have something more to go with than reigning world champion. 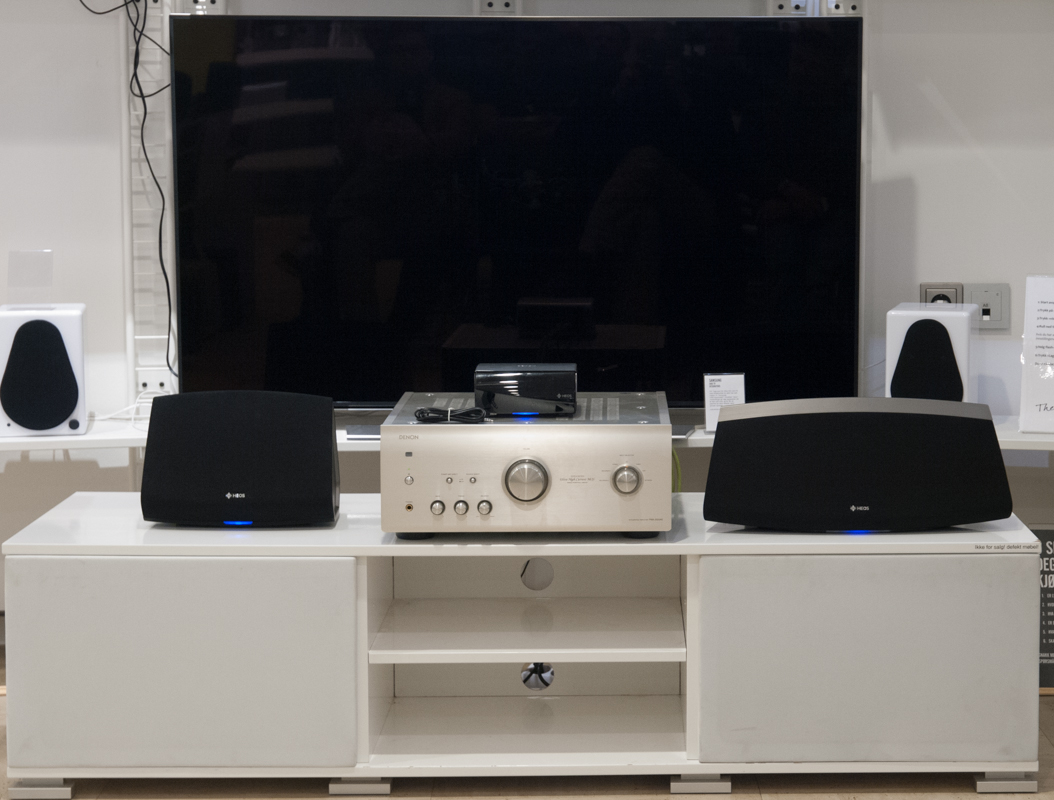 We are talking about a multiromsystem where streaming to compact active speakers is the main ingredient. A possible party-mode is also a natural ingredient for a serious contender. But what constitutes a trump card which Denon Heos can see Sonos in the rearview mirror, the integration with HiFi amplifiers and AV receivers. We come back to this later. 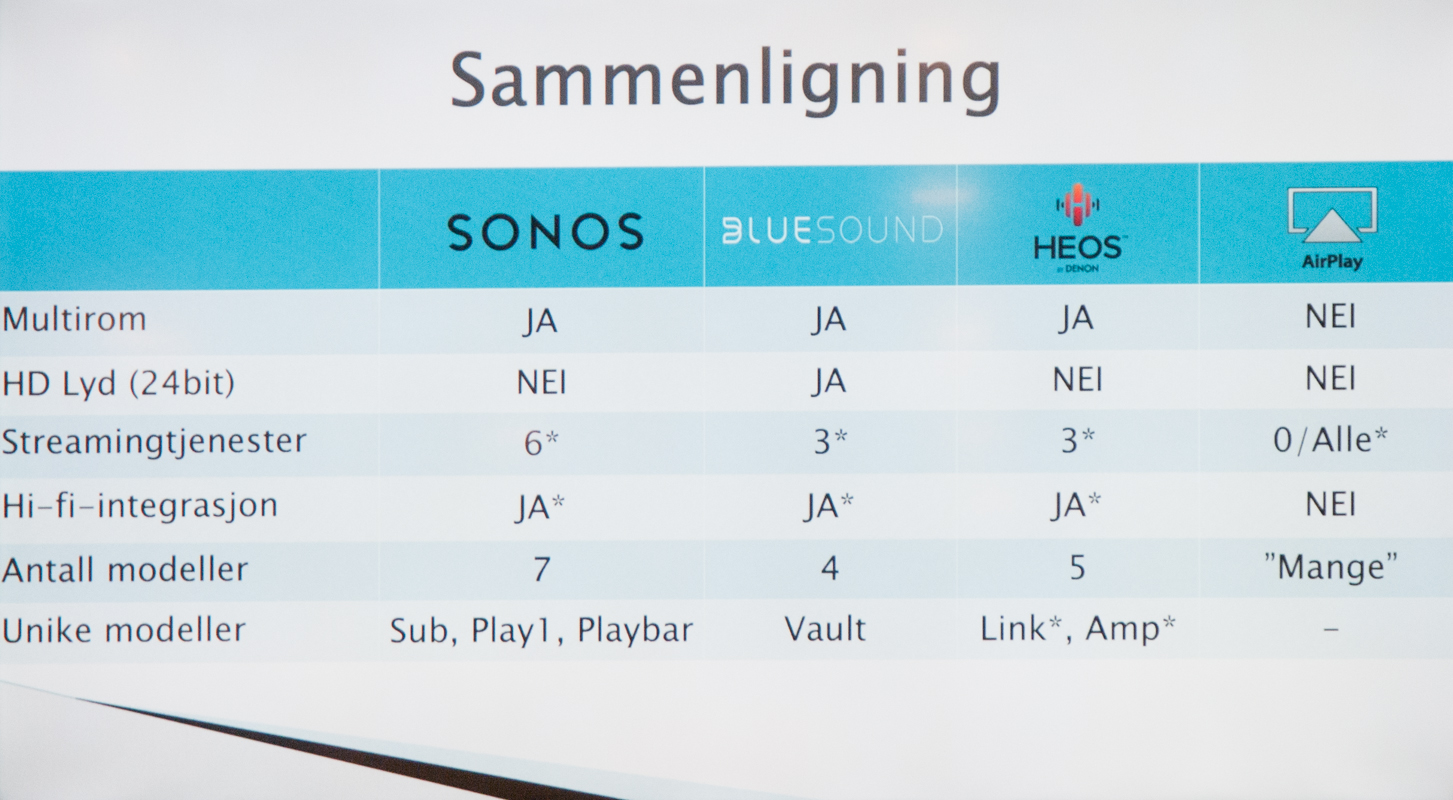 The new multi-room streaming system has some key features that Hi-Fi klubben went through.

It is given the impression that Denon has emphasized that Heos will appear as a smoothly streaming system. According to Hi-Fi klubben, this is a crucial reason why the system is also limited to 16bit / 48kHz. Heos is able to stream over WiFi in up to 8 zones simultaneously and with 100% acurate synchronization. This places great demands on the smooth transfer. And my assessment is that HighRes resolution is not strictly imperative for streaming to wireless multi-room speakers. But it is still undeniably a limitation that you can not stream the HighRes files else you might have in your collection without having to down-convert them first.

Spotify Connect is one of the pillars of the system, and it has the great advantage that one can use the standard Spotify App for control. This is a totally different world than what one experiences in some AV Receivers` own App for Spotify.

WiMP is not in place yet, but this should be a high priority. Denon foreshadows that WiMP, and thus the Lossless version WiMP HiFi will be available in the form of firmware update within a relatively short time. It is also tempting to think that the prevalence of WiMP HiFi will accelerate in general after the sister service Tidal was released in England and the United States.

Airplay is not yet available, but it also works with this. It was given the impression that Airplay ranks after WiMP in priority.

Bluetooth is more uncertain, and it is hard to imagine that this will beavailable without hardware changes - in practice it will eventually be in future models.

The system Heos is being maneuvered by a special App created for iOS and Android. Asked enlightened Hi-Fi klubben that there is a PC application on time.

Now we come to what is the real treat with the Heos system, which makes this a system that differs from all other multiromsystem with streaming speakers. Denon Heos integrates with all of Denon AV receivers in the latest generation, and the two PMA-models integrated stereo amplifiers. And here it is not just a matter of connecting the sound, but full integration of management of on / off, input select and volume control. And the link that facilitates this integration is called Heos Link. This is a polygonal box to a scant three thousand, who have both analogue and digital inputs and providing both signal transmission (PMA-amps) and transmits the control signals.

The genius of this is that Denon Heos thus not only a multiromsystem where AdHoc music listening is on the agenda, but it is also a system that expands the listening enthusiast arena. Parallel to sitting in deep concentration listening to your favorite music, for example on a Denon PMA-2020AE, the same music may be streamed to kitchen, bedroom and bathroom - or wherever you want. And without time delay which would give a fallacious chaotic soundscape in the transition zone.

There is no doubt that this integration is a strength - both Heos components and Denon AV receivers and stereo amplifiers in the top class. And even better the next generation of AV Receivers, where it is planned to integrate Heos Link.

There are three active speaker models in Heos series. The three models Heos 3, Heos 5 and 7 Heos What is common for all speaker models is that they all have USB input and a stereo mini-jack input and a network input. In addition, all models compatible with WiFi in both 2.4 and 5GHz range.

The smallest speaker Heos 3 has a price tag of NOK 2.498, - and is the only model that is clearly intended a role as a pair in a stereo setup. It has two full-range elements and two output levels. 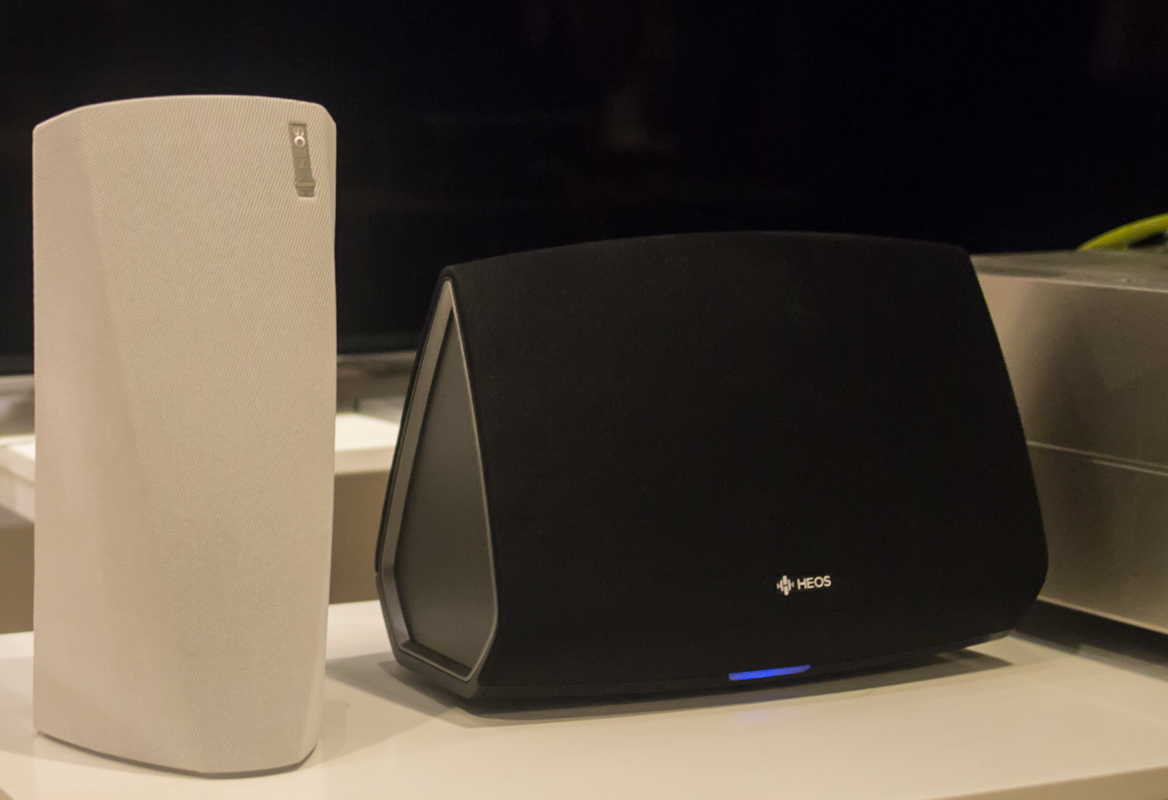 The larger model Heos 5 is primarily a model that is supposed to work alone as a compact stereo setup, although the Hi-Fi club in Bergen argues that this model also works well as a pair in a stereo setup. Heos 5 has two tweeters and two midrange / bass elements. The price of Heos 5 is 3.398, - .

The largest model Heos 7 costs 4.998, - and competing as a wireless speaker with the legendary Zeppelin Air from Bowers & Wilkins. In addition to the two tweeters and woofers, Heos 7 has a dedicated woofer. 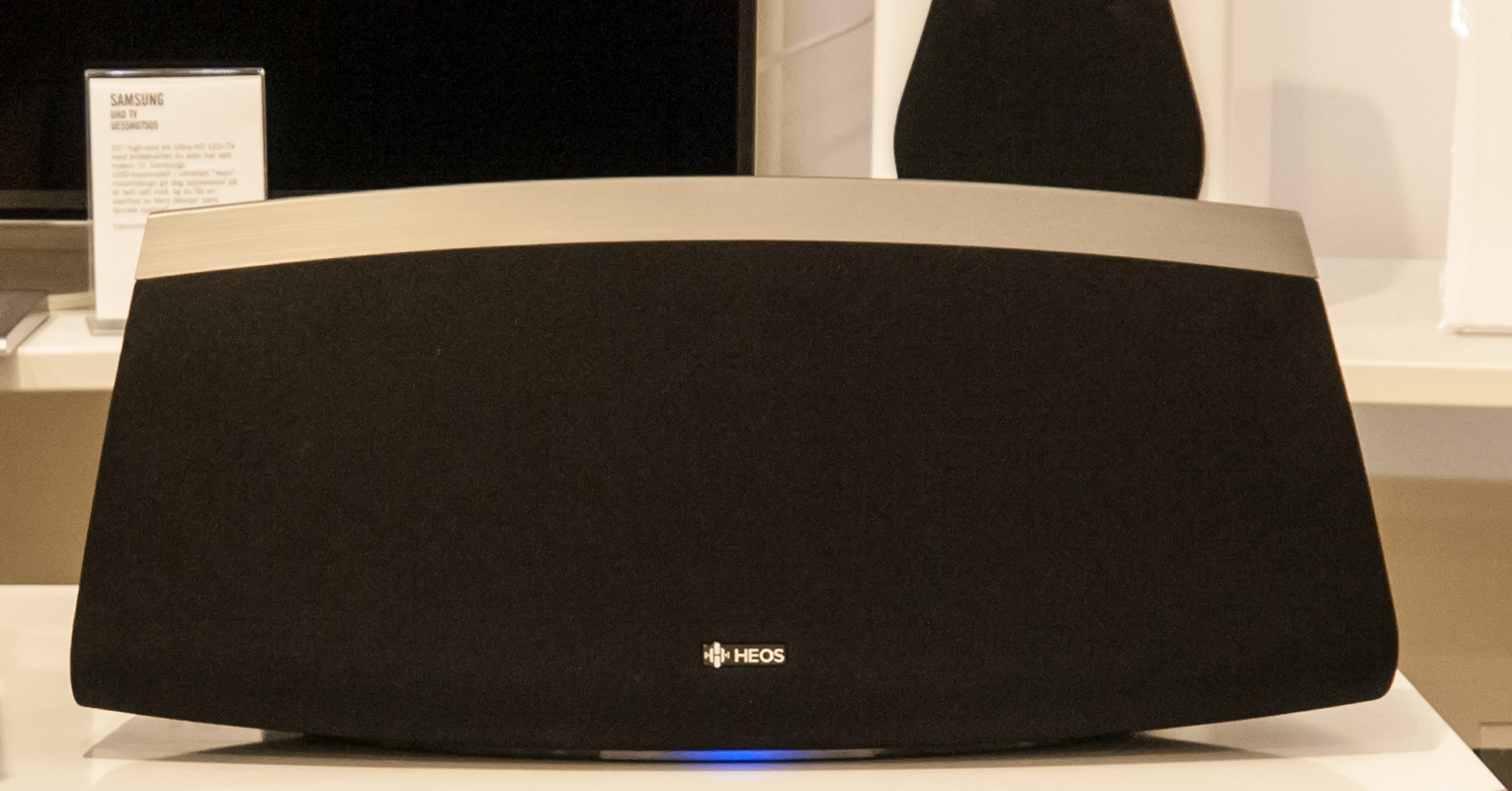 In wednesdays` demonstration Hi-Fi klubben was playing on the two larger speaker models from Denon. And for me it was when Leonadr Cohen's fresh "Popular Problems" was streamed from Spotify that these speakers showed their character. Both because this is a recording with good sound, but also because it is an album I've listened to a few times, and therefore holds a sort of reference relationship. Heos 7 had an impressive bass response, although I probably think that the level is slightly in excess. This is something it shares with its rival B & W Zeppelin. the short listening revealed otherwise that Heos 7 also sonically is in the same league as Zeppelin, although the two tend to have slightly different characteristics in terms of strengths and weaknesses. It was possible to play Heos 7 at a surprisingly high level without being shown any signs of difficulty in breathing.

But really Heos 5 impressed at least as much as its big brother. It also had a well resolved sound, and despite some minor ability to play loud, it showed a perhaps even more well-balanced sound. 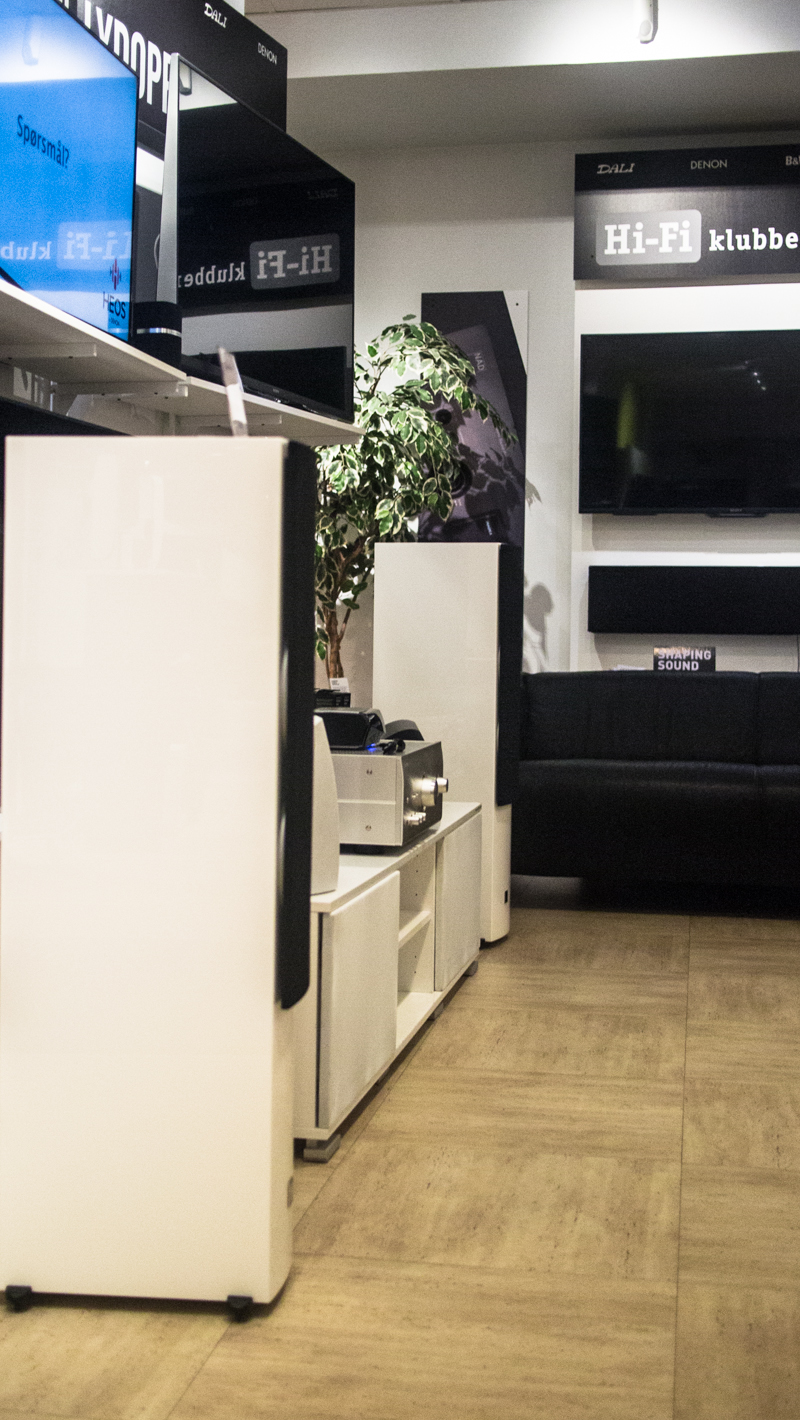 It is primarily stereo perspective that is the main limitation of the concept of a compact streaming speaker at a high level, and it was amply demonstrated when Heon concept was played over Heos Link to a PMA-2020AE, with a set of the fresh Dali Rubicon 6 This demonstrates that the Heos concept itself is excellent for use in a HighEnd concept, despite Spotify with its lossy Compcompresion in this case constitute a limitation. 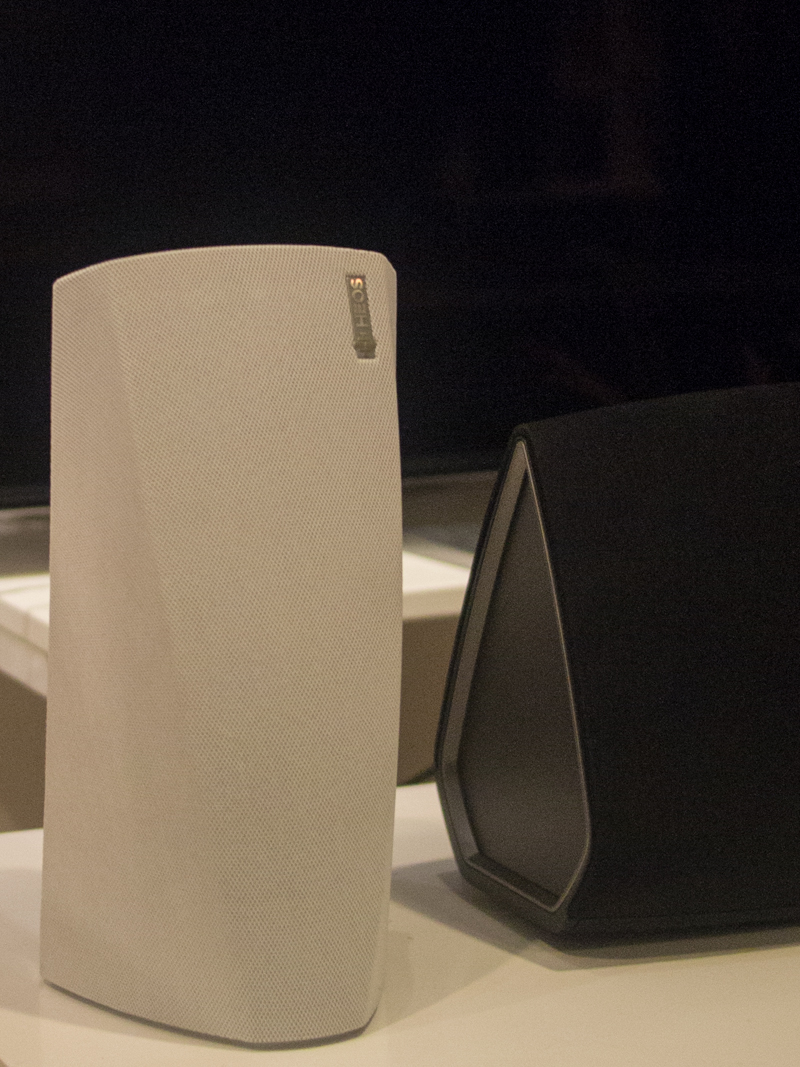 Denon's concept had a good debut in Hi-Fi klubben's premises in C.Sundts street in Bergen yesterday. This is a system that has a good chance to compete against Sonus, thanks to good sound and its possibilities for the inclusion of serious hi-fi and home theater. We have already made a deal with the Hi-Fi club centrally on a thorough review of the system in combination with the new AV Receiver AVR-X2100W, and will come back with a detailed report later.

More in this category: « Conventional (HI-FI) wisdom is almost always invariably wrong MQA Lossless from Meridian »
back to top