When Denon introduced their HEOS concept more than five years ago, it first consisted of 3 table speakers with a concept for streaming and wireless multi-room. At the time of launch, this was the whole system, although there were already some ideas that HEOS would become a streaming and multi-room concept for the adult HiFi and AV components of Denon.

Eventually HEOS has grown to be just that - a streaming and multi-room engine for Denon and Marantz. Thus, there has also been a slight conceptual confusion associated with HEOS, which is at the same time both a product series and a concept. Denon has done something about this as they launch a whole new generation of streaming speakers to take over for the original HEOS series. They are now randed as Denon, not HEOS.

And no matter how perfect Denon Home would be as a Christmas present, it won't be in the shelves until January.

The new series consists of three models, and stands out significantly in terms of design. Not so much from the rest of the world's streaming speakers, but definitely compared to the old HEOS series, where the designer took a significant amount of vitamins. The larger models in the HEOS series had an interesting design edge, while I could control my excitement about the small ones.

The design of the models in the new series has greatly simplified alignment. Upholstered pages rounded to the top and bottom, where the elegance and premium feel will depend on quality and finish. At the top is a panel with proximity sensor, a phenomenon known among others from the automotive industry, and could give a sophisticated feel.

What strikes one is that all three models in the Home series are surprisingly well-equipped. Not least in the exercise physical connections, where even the smallest has both USB and 3.5mm mini jack input, in addition to an RJ-45 network connector. Here it even from star takes a lead on Sonos' table models, and goes even further when we find that all the Home models support High-res. They support up to 192/24, or DSD 2.8 / 5.6MHz.

All models in the new Home series have support for Roon. That is, they are certified as "Roon tested". They are also prepared to be part of a surround setup and can be combined with the Denon DHT-S716H soundboard and a HEOS-compliant wireless subwoofer. All models can also be paired in a stereo setup if you buy two of them.

As a HEOS engine, the Home series is compatible with most streaming services. HEOS also has a well-functioning multi-room function. You may control HEOS through an app for iOS and Android. In addition, there is a third-party app for Windows called HEOS Remote. It costs next to nothing, and works fine.

We have discussed HEOS more thoroughly as a system in our test of Denon's interesting streamer DNP-800NE . HEOS is, in a way, the arch rival to Sonos, and to sum it up, we can say that HEOS's strengths compared to Denon are that you can seamlessly integrate full-blood HiFi setup with simpler wireless speakers into a multi-room setup, and that HEOS supports streaming of HighRes files. On te other hand, Sonos' strength lies in the fact that it has an alarm feature that lets you pre-program when you want to wake up to sweet music, and that they have an in-house app for windows and Mac OS.

All Home Series models have a built-in microphone and are prepared for voice control from Siri, Alexa or Google Assistant. Functionality with the built-in microphone will be available through a software update in 2020, and Denon emphasizes that the user must approve activation of the microphone.

Another feature that should also come via software update is something Denon calls "Placement EQ". Denon provides no further information on this, but it is not very bold to assume that this is a variant of room correction. It will be exciting to see how Denon will implement 3 different stored variants of EQ settings.

Home 150 is the smallest model in the Home series. It is an obvious challenger to Sonos One, and Denon has also been close to this competitor in both shape and dimensions. But the Denon Home 150 is 20 mm taller than the Sonos One. 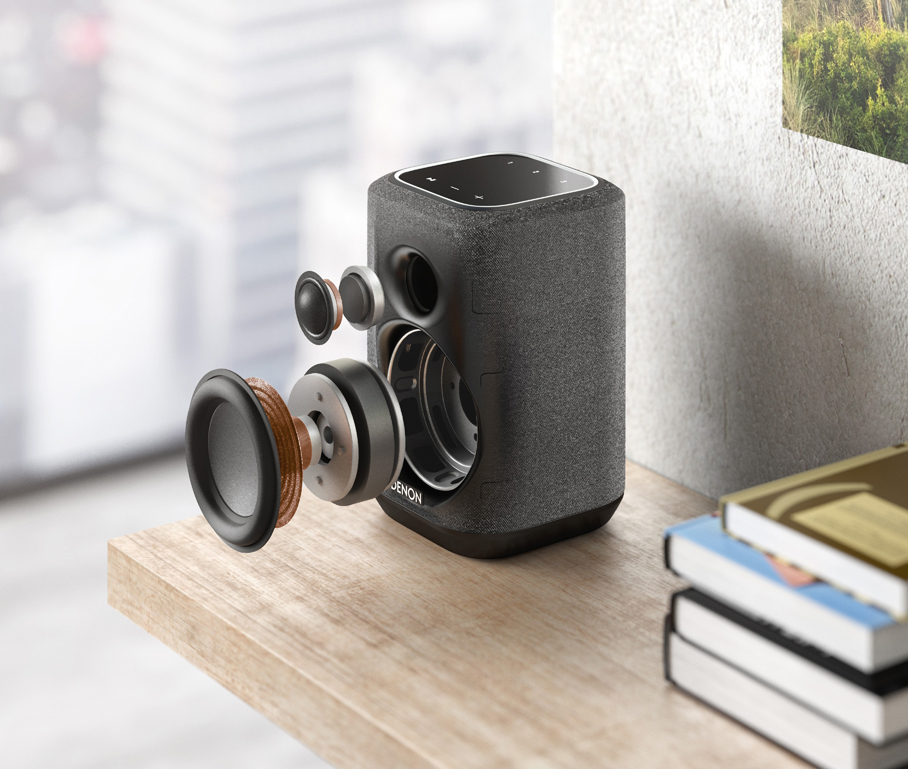 The home 150 has a 25mm treble and 89mm midrange and bass. Unlike the two larger models, the Home 150 is a pure mono speaker, but can be configured for a stereo setup if you have two of them. To operate these elements there are two class-D amplifiers.

The Home 150 has three quick selection buttons. Here, for example, you can store frequently used radio stations from TuneIn.

Read more about Home 150 at Denon

The Home 250 is a significantly larger model than the smaller unit, and has a distinctive rectangular main shape with rounded corners. The Home 250 is a stereo speaker, with the strong limitations it allways gives for stereo perspective to have both channels in the same speaker. But the Home 250 also has the option of configuring 2 pieces. in a real stereo setup. 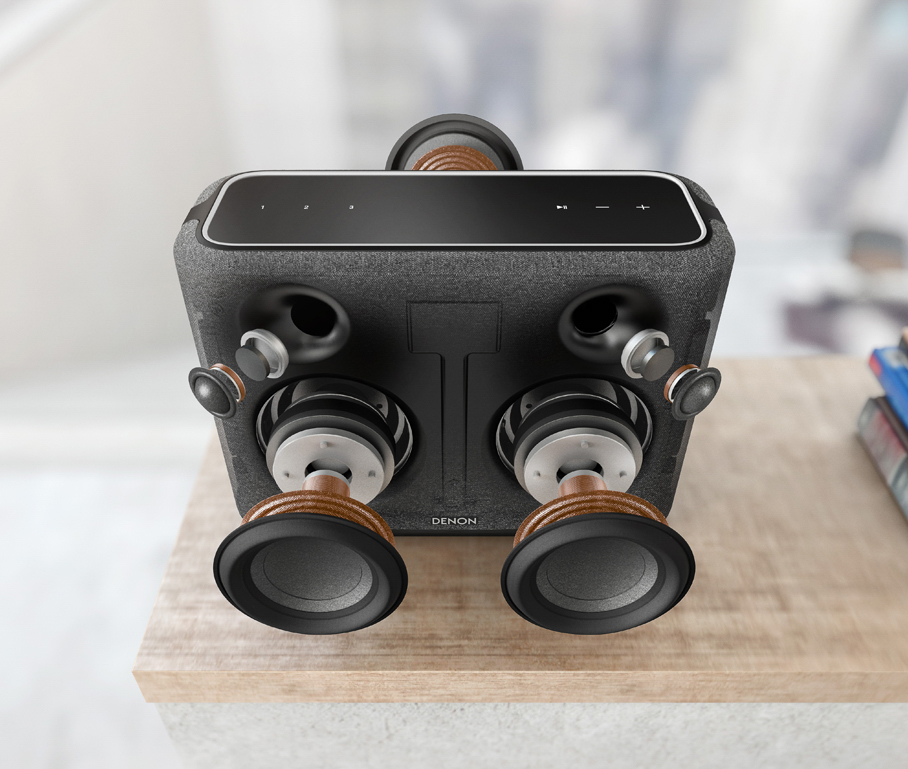 The fitting in the Home 250 is two 19mm tweens, and two 100mm midrange and bass. In addition, there is a 133mm slave bass in the cabinet, which operates in common for both channels. This must mean that there is no acoustic separation in the cabinet between the right and left channels.

The Home 250 also has three "buttons" for quick selection.

Read more about Home 250 at Denon

The flagship of Denon's new Home Series is Home 350. This too is a stereo speaker, and can also be set up in a real stereo setup if you have two units. 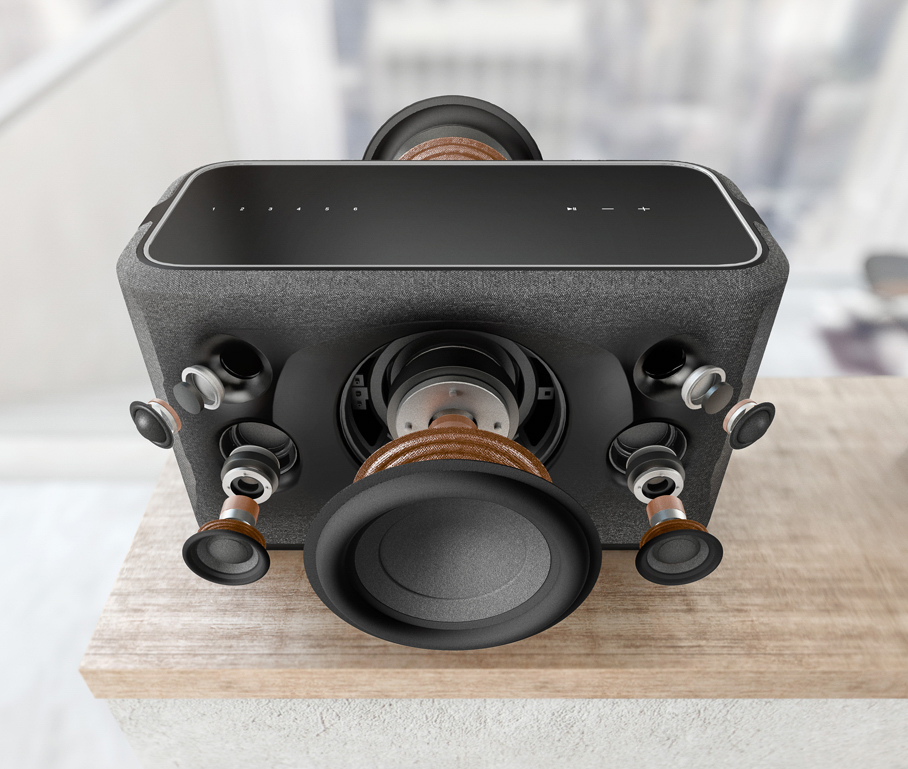 Unlike the two smaller models, the Home 350 is a three-way design. The treble is served by 2 pieces 19mm treble, two 50mm mid tones and two 165mm for bass.

The Home 350 is suspected to be chopped up more expensive than rival Sonos Play: 5, but is also a larger speaker.

Read more about Home 350 at Denon

Denon is imported to Norway by Hi-fi klubben

More in this category: « SINGularity and Entity - two MC Phonostages from Lejonklou New Premium Series of soundbars from LG »
back to top