Denon launches a new model AV receiver with high ambitions . The Denon AVR-X3600H is making a class trip over its predecessor X3500H. With the new features of the AVR-X3600H, it is tempting to say that this AV receiver moves from the middle class up to the top class.

Pricewise the AVR-X3600H begins to approach brother AVR-X4500H, and this applies indeed also for the specifications, where it is very temping to say that the breathing big brother in the neck. And another side of this class travel is the distance down to the newly launched smaller model AVR X2600H which we wrote about a few weeks ago has increased significantly - by five thousand NOK. Whether the sound is worthy of belonging in the top class, we intend to find out during late summer or fall . Stay tuned … .

This is the area where the new AVR-X3600H differs most clearly from its predecessor, and at the same time it makes the AV-receiver move into the top class. Cause where the AVR-X3500 is a 7-channel amplifier with 7.2 pre- out , the newcomer has increased the power amplifier for two additional channels. And in addition, it has an 11.2 processor, and also 11.2 pre- out. In practice, this means that where the X3500H is limited to the minimum configuration of Dolby Atmos and DTS:X, this can be played in a full 7.2.4 configuration with the AVR-X3600.

The only 3D audio format you could miss with the AVR-X3600H is Auro-3D. If you want this you still need to og to the bigger brother X4500H. Denon and Marantz are also the only one of Mainstream manufacturers that offer 3D-Audio. 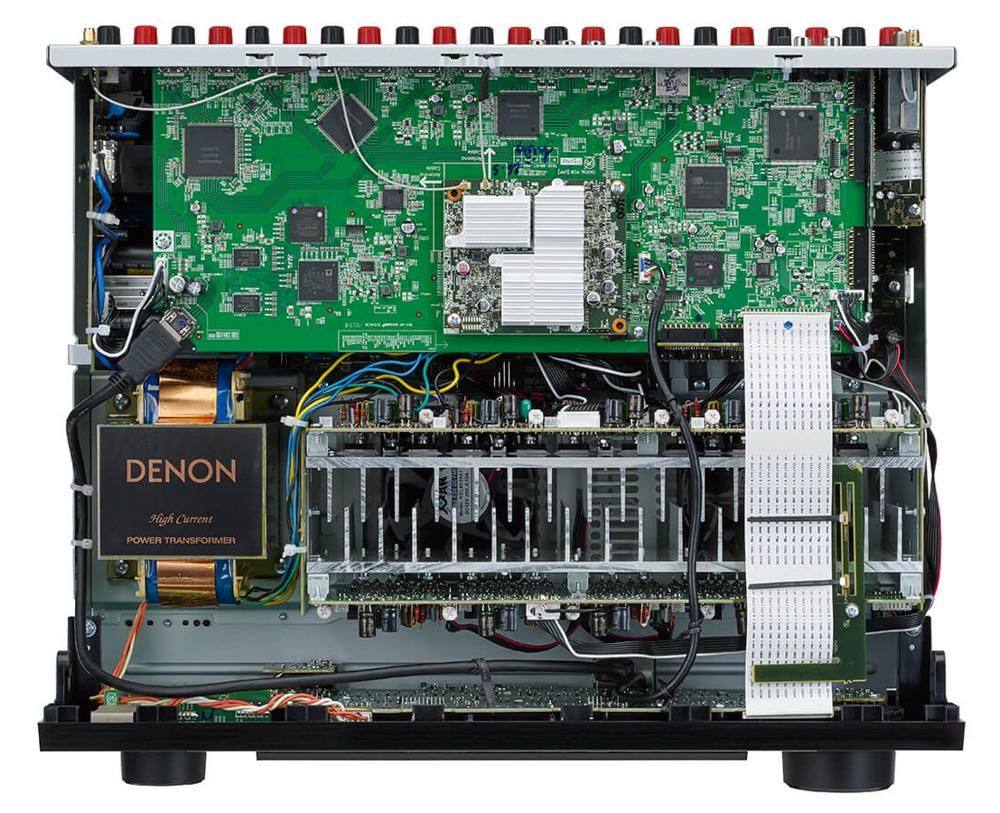 IMAX is a phenomenon that emerged as a spectacular cinema format at the beginning of this millennium, and last autumn they launched their home theater business venture. IMAX Enhanced is the new wine in the home theater arena. We who enjoyed the format wars between Dolby and DTS in the early 2000s, and who invented a huge bowl of popcorn when a new format war in high-definition sound took place between DVD-Audio and SACD - not to mention the battle between Blu -ray and HD-DVD, feel a bit of excitement when it now brews up a new format war between the two giants Dolby and DTS.

Certainly, the format war is a bit more diffuse and indirectly this time, but no reason to let the popcorn machine idle for that reason. IMAX Enhanced on one corner of the ring, and Dolby Vision / Atmos on the other side. So far, there is no technical obstacle to an IMAX Enhanced release having video with Dolby Vision, but the likelihood of it happening to the archivist DTS as a major partner in IMAX Enhanced is not annoyingly great ... And just to let the reader lower your shoulders - AVR-X3600H supports both Dolby Vision and HDR10+

And what makes the format wars nowadays more pure entertainment is that, unlike some previous wars, there is talk of both – and, not either - or, as in many cases, a decade or two ago. . One consequence of this is that these format wars can last for years, and contribute to intensified competition and development to the benefit of end-users.

IMAX Enhanced is not an actual new format, but a bit of a combination of certification, format and program material.

Let`s start with the certification. It is IMAX that has entered into partnership with DTS, and they have, among other things, created a certification scheme for processors and receivers , but also for TVs and projectors. IMAX Enhanced has so far been reluctant to provide detailed information on the criteria to be fullfilled in order to be certified, but for video publishers it is a bit of extreme HighEnd models. On AV receivers, it seems that in addition to some quality requirements, there is also a condition with a minimum of 9 amplifier channels and 11.2 processor. IMAX Enhanced has or s 5.1.4 as minimum configuration requirements and recommends 7.1.4. However, an audio track can still be downmixed to any configuration.

It is a bit in the borderland to say that IMAX Enhanced has its own audio format. It is based on DTS: X, but should have some additional settings so that the correct one is to say it has a special version of DTS: X. Anyway, an IMAX Enhanced material played on a certified receiver will automatically switch to the correct settings. It is not clear whether this is settings that you manually could tune into a receiver that does not have IMAX Enhanced certification.

On the video-side, the two most important elements are the noise reduction of some material during remastering of releases for IMAX Enhanced . The most important thing is probably the video format, which on IMAX releases is typically 1.9 : 1. with a minimal letterbox - conversion this picture fill completely a STD 16: 9 screen.

A good news is that there will be full two-way compatibility . All IMAX Enhanced releases can be played on non-certified equipment. You just lose some of the benefits.

Manufacturers of AV receivers and processors with IMAX Enhanced certification are today dominated by brands under Sound United, after purchasing Onkyo Corporation 's Home Audio Division . In addition, Trinnov and Sony, and a couple of Harman 's brands (Arcam and Lexicon ) are on the scene.

It is probably quite possible to live a fairly meaningful life without IMAX Enhanced . On the other hand, it is absolutely something you would want to see if you are looking for an AV receiver for over ten thousand NOK.

Of course, like the AVR-X2600 H, X3600 also supports voice control from the three major ones. We're talking about Amazon Alexa, Google Assistance and our dear Apple Siri.

We also mention the important news that X3600H also gets a Bluetooth - transmitter for headphones. This comes via a software update, and is scheduled for Q4 2019. This is a significant and for many very useful upgrade over its predecessor X3500H.

It will eventually become a matter of course for Denon and Marantz 's models. But also the X3600H is equipped with full Heos compatibility. It provides access to a thorough leash of streaming services, and is also an avanced multiroom solution that gives you the possibility to both stream synchronously with other complete setup in other rooms, but also with simple active speakers in the Sonos segment, supplied by Heos. Read more about our assessment of Heos in the test of a complete 800NE series setup .

Denon AVR-X3600H is expected to be stocked in Norway in mid-August.

Read more about the AVR-X3600 at Hi-fi klubben

Read more about the AVR-X3600 at Denon

More in this category: « Naim Uniti Four new budget surroundreceivers from Sony »
back to top