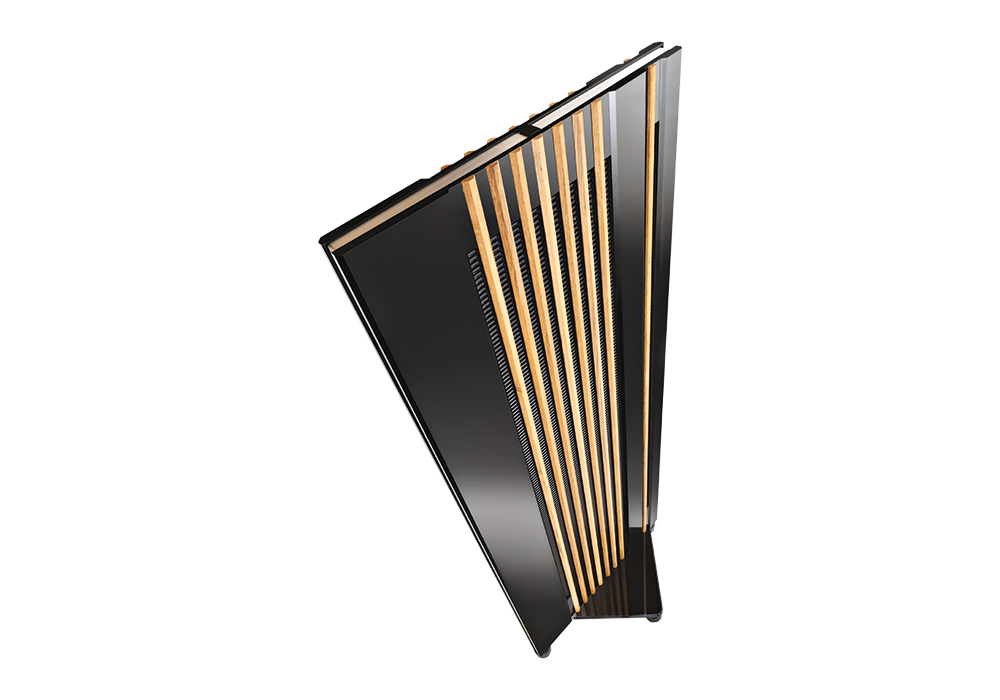 AlsyVox is a new and exciting addition to the Scandinavian speaker flora. And it was this loudspeaker that urged me taking a break from family and zoo this summer day towards the end of the holiday.

I received a very warm welcome from Paul Mortensen this day in july towards the end of the holiday. Fiery, one might say, because the temperature moved up into spheres where it has no habit of traveling in our latitudes, although this is in the South - a foreign territory to me.

PM Audio is located in Nodeland, approx. 10 minutes drive west of Kristiansand, in premises that are really a somewhat large detached house where HiFi business, listening room, cable workshop and housing are integrated in an unusual way. I know of men who would be thrown out of home because of far less gear than what we find here. But on the other hand, it is not so easy to determin who should throw out who at Mortensen's. Because PM Audio is a family business where both Marion and Paul are involved in the operation of the company. In fact, I did not find many traces of Prestbakken 26 being a residence. But this must be a very practical solution when working almost 24 hours a day, and most people lack their sharp distinction between work and leisure. There is reason to assume that Marion and Paul live for PM Audio most part of the day. 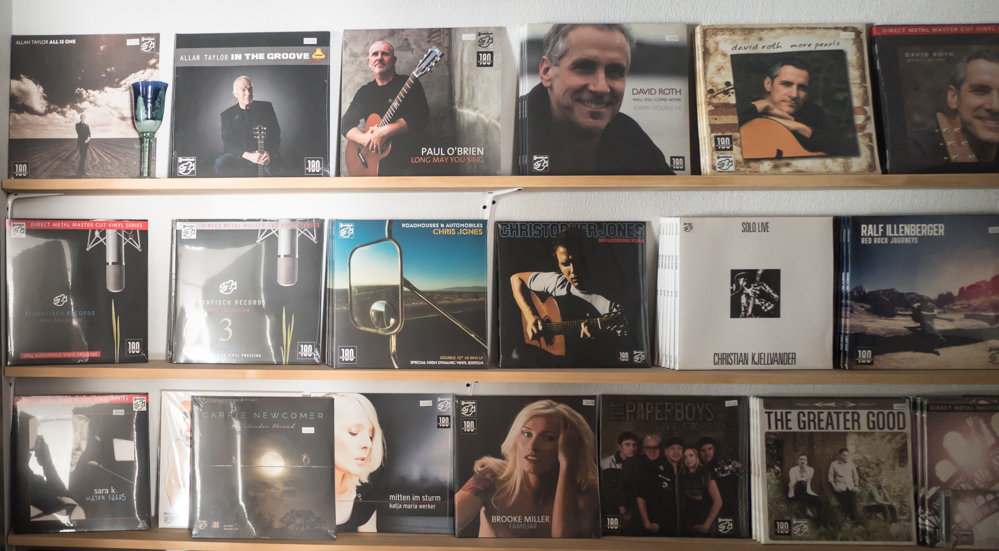 Already as I enter the hall downstairs I am greeted by a section where audiophile recordings are on display next to Paul's great cable passion. Paul shares, among other things, my own enthusiasm for SACDs, and has a large selection of what appears to be the only record store in the South part of Norway, after Platekompaniet throw the cards in this part of the world. But there is also a significant amount of vinyl in the range, both standard and audiophile releases, with Stockfish and Analgue Productions dominating. 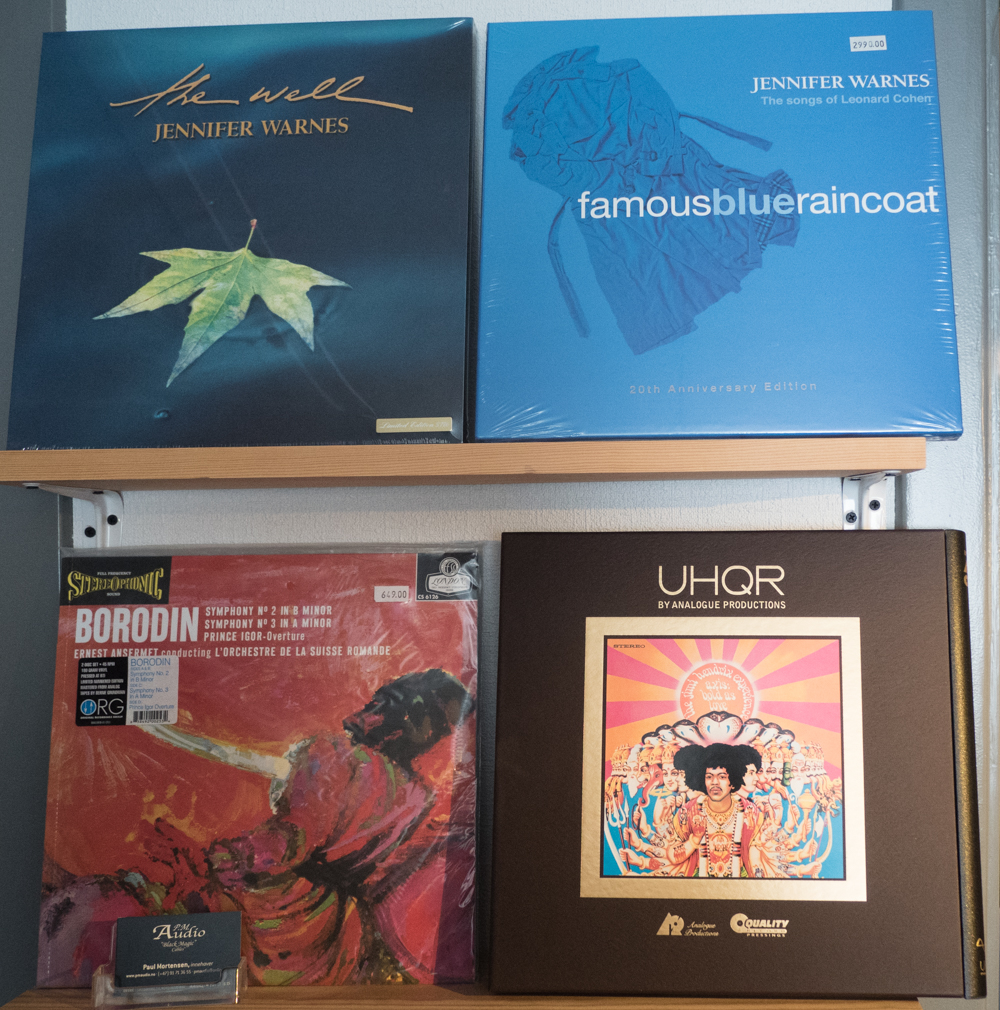 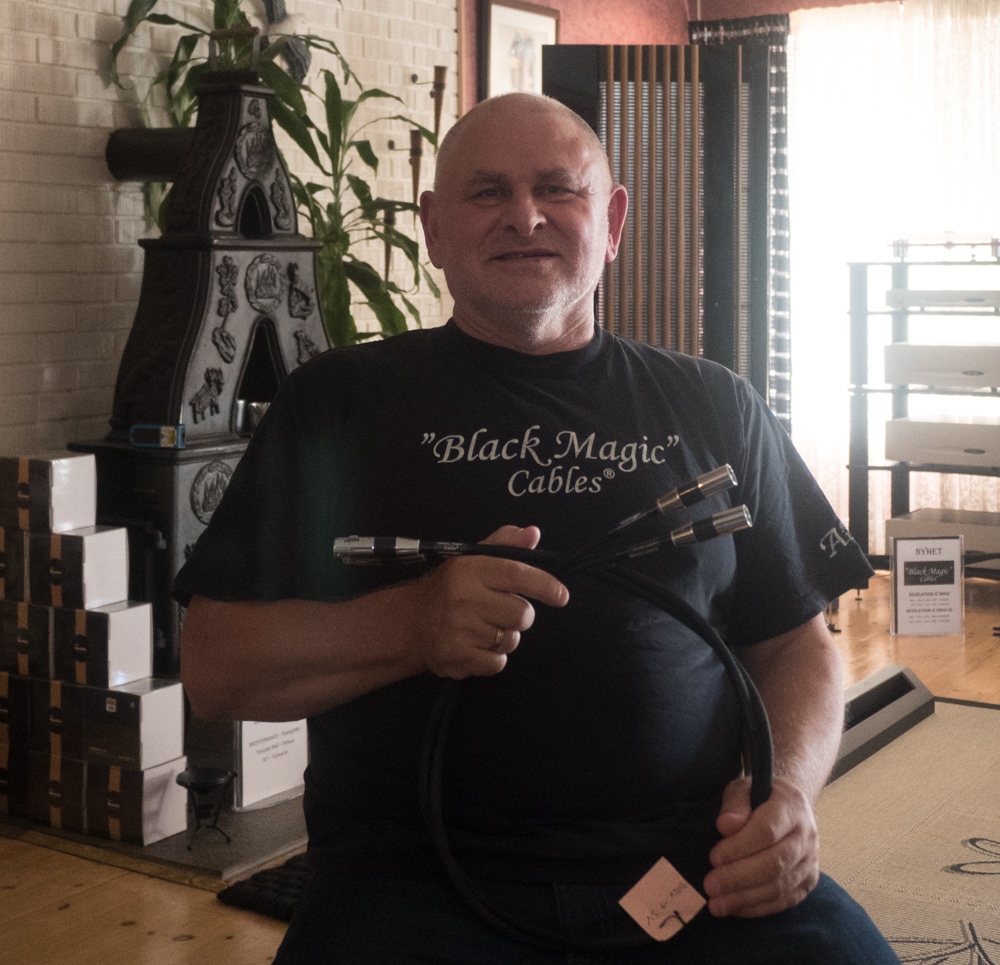 Black Magic are cables where shielding is placed in the high seat, especially on the signal cables Relevation IC . The raw cables themselves are manufactured outdoors, but are cut to various standard lengths and terminated with Furutech plugs with gold or rhodium coating at PM Audio. By the way, you can get them produced in special length on demand.

The speaker cables Emotion have a greater degree of indoor production, and are available both as standard. and as biviring editions. 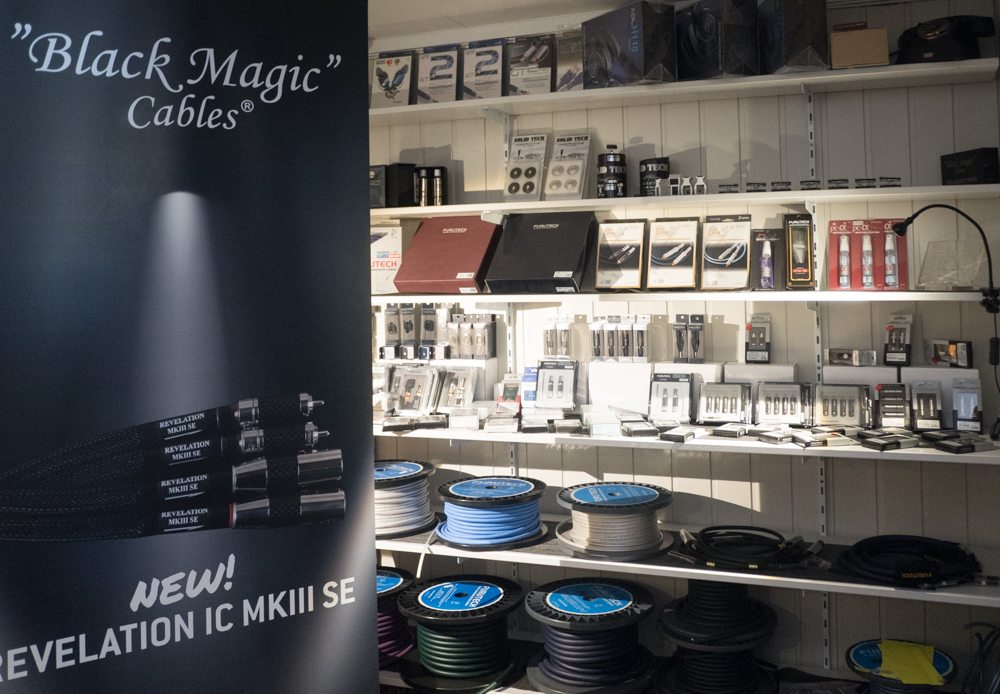 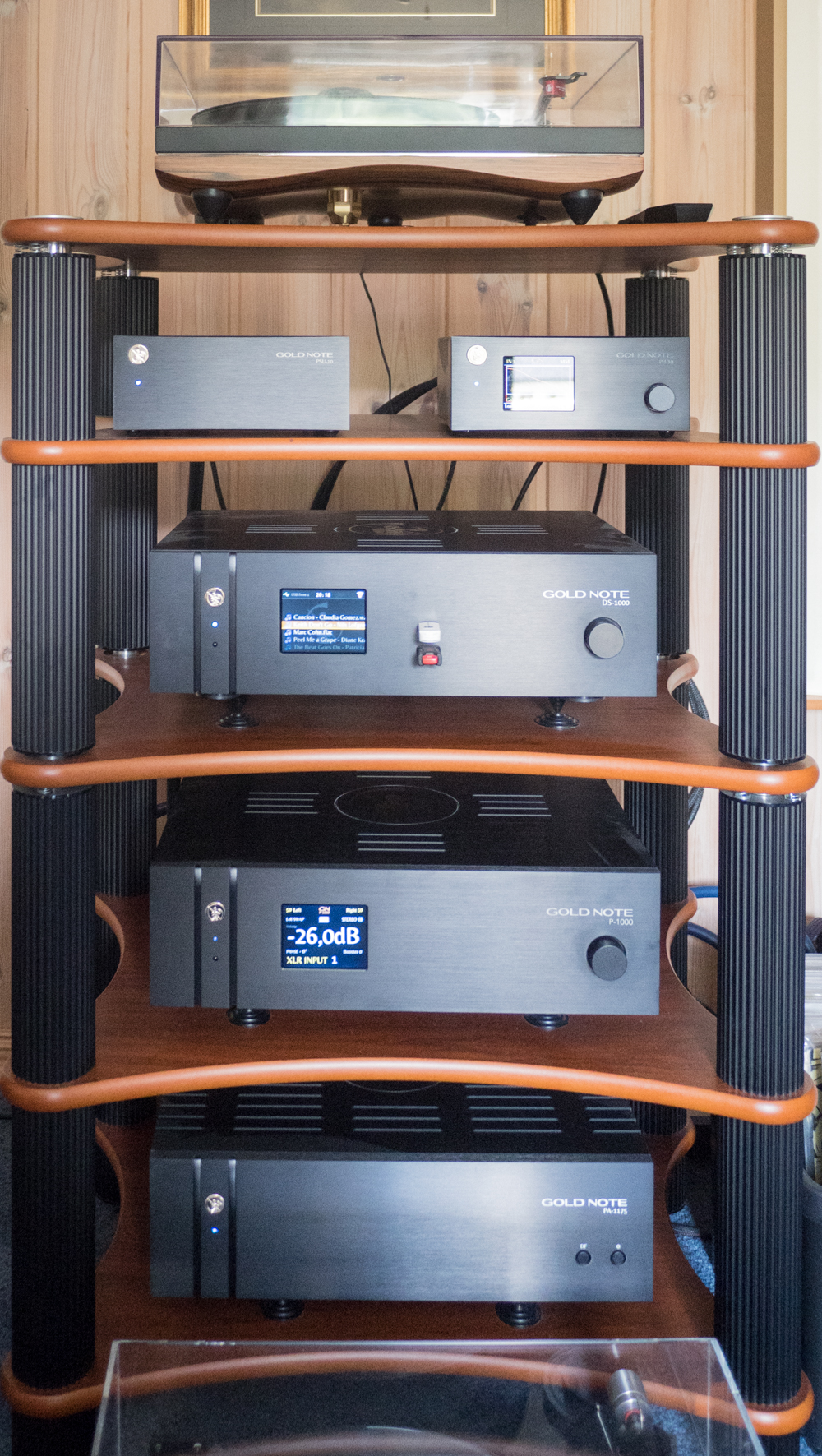 In the smallest listening room, in particular a rich collection of electronics, recorders and speakers from Gold Note catch my interest. Not least a half-width component that may at first glance appear to be the blood-fresh streamer Gold Note DS-10 that we announced a couple of weeks ago, but which turned out to be the identical look and perhaps at least as interesting RIAA preamplifier PH-10 at about half the price of DS-10. What sets this MM / MC RIAA apart from most other phono stages is that it has 6 different EQ curves, including DECCA-LONDON and AMERICAN-CBS-COLUMBIA curves. This, of course, in addition to the standard RIAA curve. And as a perhaps more fun than useful gimmick, the actual curve is shown graphically in the 2.8-inch front display. 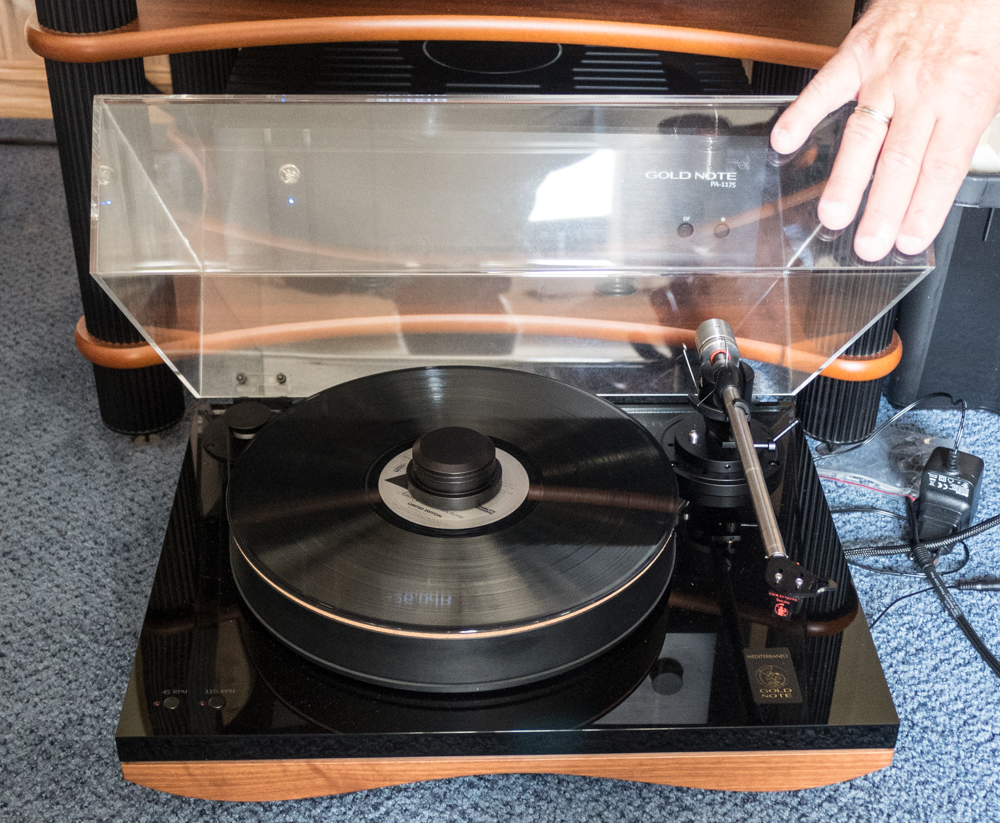 In addition to a few record player models from the Gold Note, some more moderately priced record player models from Scheu have also been exhibited. And then it is impossible not to become aware of the perhaps most interesting content of this room. The Krix Equinox mk III is the inexpensive tripod speaker that amazes most people who listen to it. Not only did Arve praise it in the clouds when he tested it 2-3 years ago; And when Paul now reveals that there is a mk IV in the horizon, the senses are involuntarily sharpened - interest for a review has already been announced. 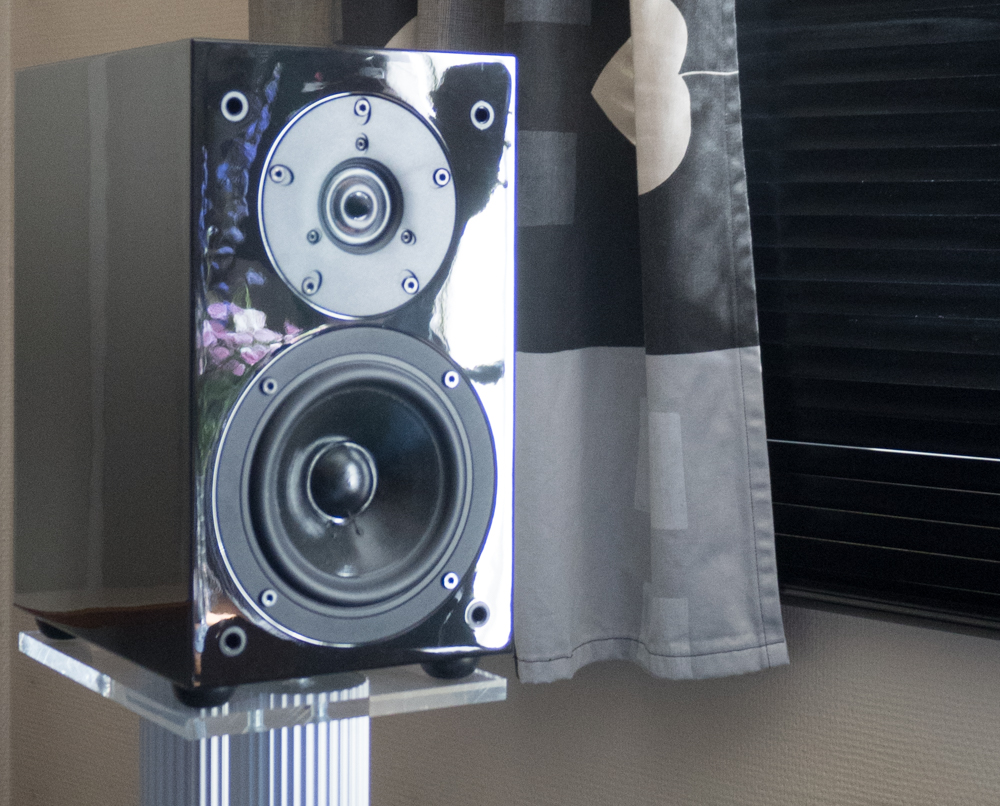 Perhaps the most different manufacturer PM Audio has agency on is Dutch Metaxas Sins. I met the first incarnation already downstairs in the entrance hall, in the form of a headphone amplifier costing more than seventy thousand NOK named MARQUIS Memento Mori. And I can boldly claim that this is probably the first headphone amplifier I would avoid coming across in a narrow alleyway after dark.

But there's more going on, because up in the main arena there were various parts to what could turn out to be a turntable. But already based on the parts that were spread out over a few square meters of floor space, I could quickly see that this is not exactly a Rega. Metaxas & Sins also has a lot more to offer, including two different models of tape recorder. So here is just to open your heart and purse if you are looking for unique, successful art. 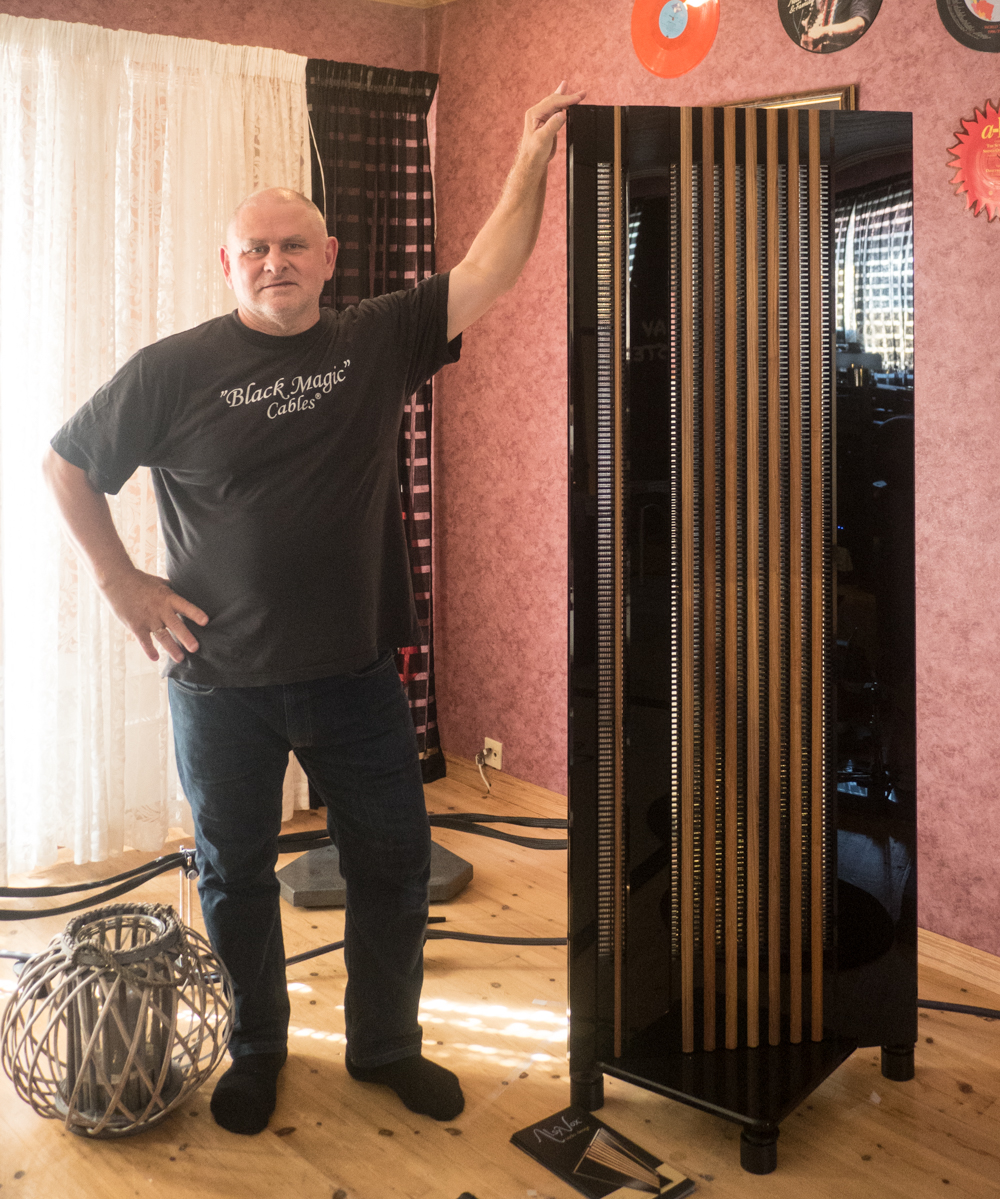 Then we finally got to the main attraction. These speakers we reported earlier this summer , and for which Paul got the agency hijacked after this year's HigEnd in Munich. He has cast a lustful look at these speakers from a distance for a few years, but the opportunity to listen to them has not flipped until now this year.

Alsyvox is located in Valencia, the Spanish city that is otherwise filled to the brim with spectacular architecture by Santiago Calatrava. But since designer and designer is Italian Daniele Coen, these speakers are referred to as Spanish-Italian, and all have model names with unmistakable Italian sound.

AlsyVox has four different models - Tintoretto, Botticelli, Caravaggio and Michelangelo. Paul has initially chosed to bring in the second smallest model Botticelli, but without "second least" is the most descriptive characteristic I can imagine. These 115 kg heavy flakes has a height of 1770 mm and is 640 mm wide.

The structure of the AlsyVox speakers are 3-way magnetostatic dipoles. At the top they reach up to 40kHz, while Botticelli goes flat Down to 22 Hz! The larger models go even lower, respectively. 18 and 20 Hz, still flat, with most manufacturers indicating frequency response that includes a roll-off of -3dB, or even -6 dB. 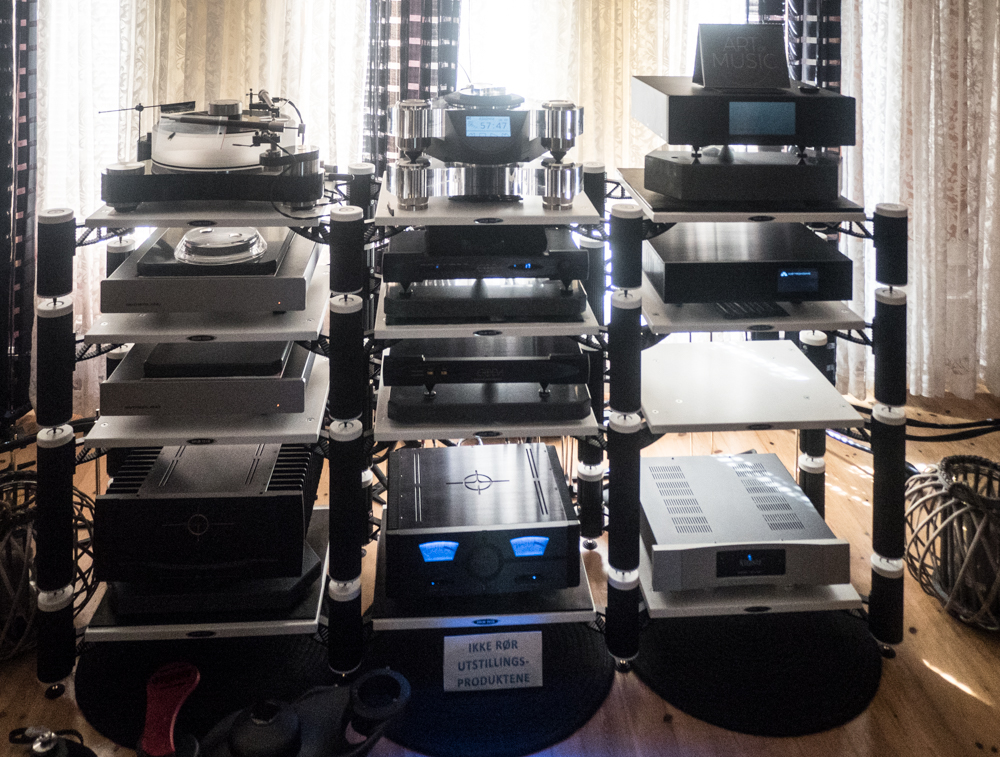 Magical sound never arise in a vacuum. Therefore, it is important to present the rest of the layout that contributed to the exquisite result. Paul has been helpful, sending me an outline of the set we played on this merry Christmas day: 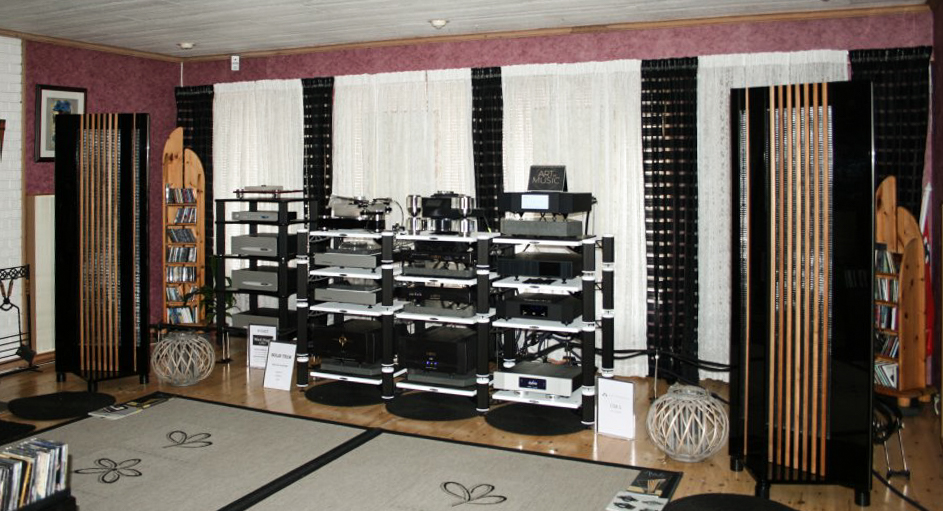 It started with the KKV classic Desemberbarn , where Kari Bremnes sings with Rikard Wolff, who passed away a couple of years ago. On the opening track, Wolff sings alone, and there is a rather magical presence in his vocals accompanied by a piano, and eventually also the violin. The soundscape is huge and the sound is crystal clear. The bass is cellar deep, effortless and with great authority.

The next disc on the CD player was Sheffield Labs' Matter of Time , with Michael Allen Harrison & Friends. I can't remember the last time I heard such a compelling and natural rendering of a piano, without the piano itself being present in the room.

More from Sheffield Labs - The Moscow Sessions Complete is a triple CD with works by various composers. Paul started with CD 2, and I took the opportunity for a small quiz. I met pretty precisely on dating and nation, but have to admit a little shamefully that I didn't take Shostakovich. To my defense, he had not yet developed much of his character yet at Symphony No.1. But anyway - the sound reproduction was magical. Very few are able to present such good resolution and precision of the instruments in a symphony orchestra. And again, this deep, authoritarian bass impresses, even though it is only fairly secluded in the soundscape. That's when good bass really shows up, not on megabass releases. And there was also a pretty formidable dynamic on this recording, a dynamic that really got to romp on BOTTICELLI.

A small visit of Tschaikovski on CD 1 showed that the magical sound reproduction was not a coincidence, related to Dmitri's first symphony.

Finally, Paul also had to play some vinyl. The film music from Dances with Wolves is film music with American accent signed John Barry, almost a bit Copland. Here exquisitely reproduced with great dynamics and fantastic resolution. And I am reminded of how lucrative it is to listen to this type of music when the facility is unable to convey the whole while preserving all the details, but collapses in the experiment. At BOTTICELLI it sounds fantastic.

We lift our eyes 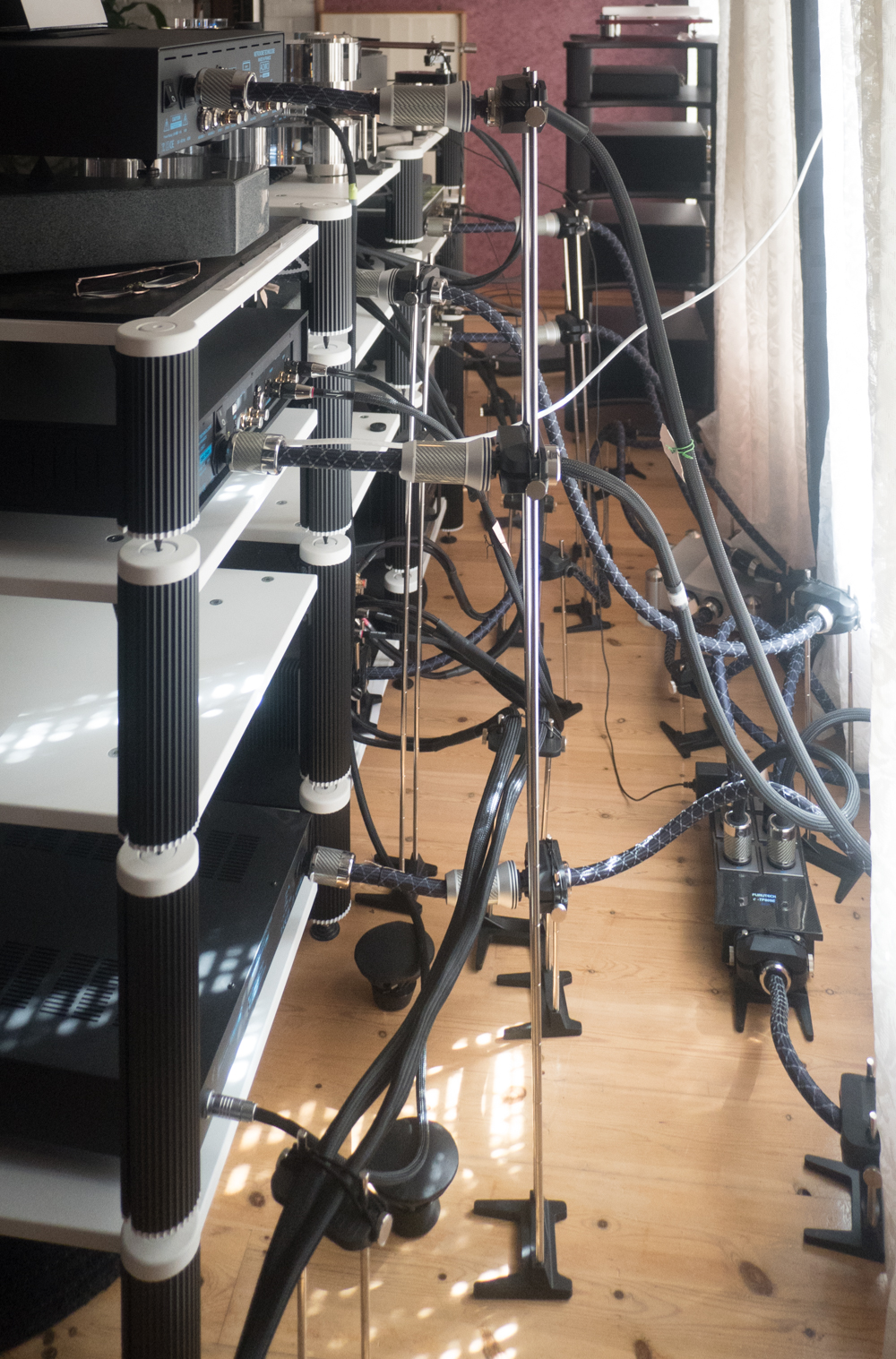 BOTTICELLI held a very compelling and impressive concert for a short hour at PM Audio. Paul himself thinks that he has now reached the finish in his quest for the optimal sound, although he is not quite done with the process of placing the speakers in the room. One of the factors he wants to work more on is acoustically disconnecting the speakers from the floor as much as possible. And when that process is finished, he is fiddling with the idea of ​​arranging some sort of mini-mass at PM Audio.

But of course he will not let down Hortenmessa this year either. AlsyVox becomes an important part of what he plans to play. But it is not easy when each speaker weighs well over 100 kg.

Visitors to this year's Horten Fair have something to look forward to at PM Audio's department this year!

Read more about AlsyVox at the manufacturer