Denon presented this year's collection of AV amplifiers at a digital Press webinar at the 4. of June. As expected, we find some interresting news in this generation.

There are hardly any eyebrows about the model names in the 2020 Denon AV amplifier collection. That is, unless you study the details of the model names. Because there is a letter that has changed in most models, in addition to that the model number has risen in degrees by approx. a hundred or two.

What we aim for is, of course, that e.g. The AVR-X3600 has become the AVC-X3700. This is an indication that Denon has skipped the FM tuner in all models over 700 Euro, and thus AVR- has become AVC. Except for the AVR-X2700H DAB, which has a DAB tuner onboard.

HDMI 2.1 is the new wine, and Denon will be first to serve it. Denon's 2020 generation will be the world's first AV amps to support HDMI 2.1 and 8k. But at the press release, they revealed that Yamaha is breathing down their neck, and is also expected to launch HDMI 2.1 on this year's New products.

HDMI 2.1 is something Denon believes the market will be keen on demanding. And this has primarily to do with future security. For even though 8k TVs per today is an extravagance on the verge of insanity, it is something that will come with great strength in the enthusiast market in the coming years. 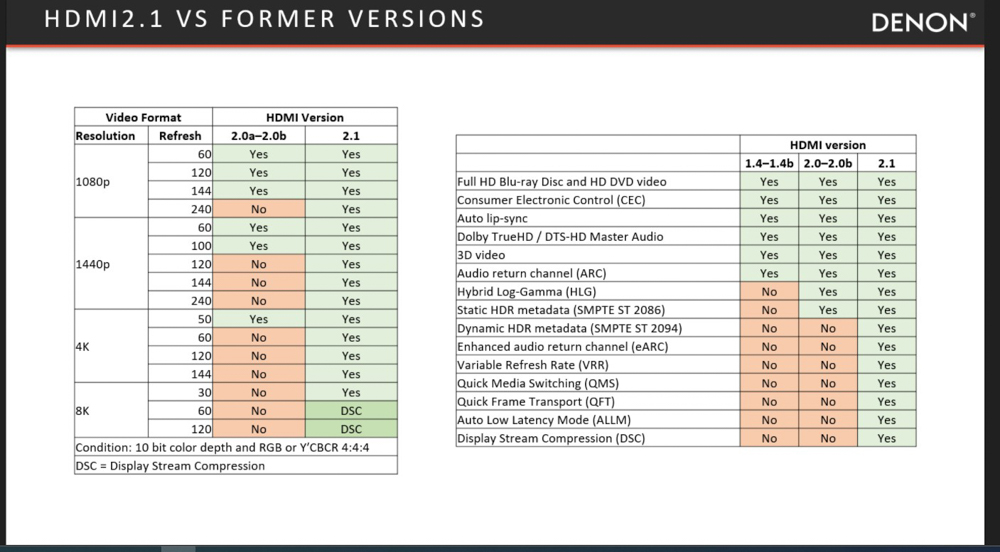 But there are several aspects of HDMI 2.1. Although some manufacturers have also implemented eARC in HDMI 2.0, 2.1 will support eARC. This means, among other things, that you can receive 3D sound directly from the TV via eARC, and surround sound in full resolution. Actually, eARC is more about quality and resolution than about the number of channels.

Still, it's important to note that only one of the HDMI inputs and two HDMI outputs support 8k, even though you may read a different story on another webmagazine ... 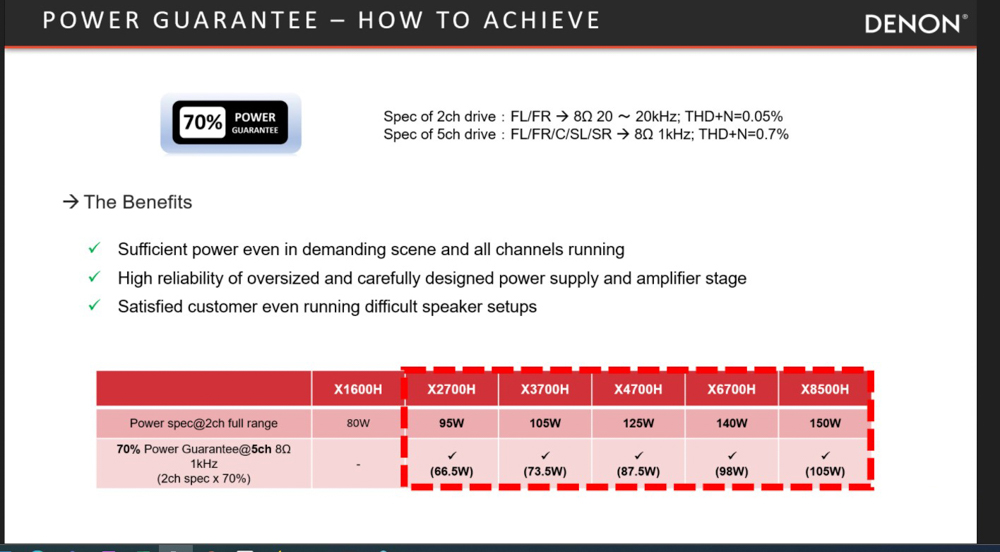 A new feature of the year is that Denon offers a guarantee on power performance. This means that power with operation in 5 channels must at the same time be at least 70% of power stated in 2 channels. That is, there is no effect measured under the same conditions here. The power in 2 channels is measured in 20-20,000 Hz and THD + N  of 0.05%, while the guaranteed power in five channels is simultaneously measured at 1kHz and THD + N of 0.7%. Not quite Apples vs Apples there…

This is a feature previously only available on the flagship AVC-X8500H. Pre-Amplifier Mode is selected in Amp Assign, which means that all power amplifiers are turned off when the AV amplifier is put into this mode. This is relevant if you choose to use only external power amplifiers. And this is not just about saving on the electricity bill. It provides greater robustness against distortion when run at high volume. If the power stages are still running when using external power amplifiers via Pre-out, there is a risk that they may be clipping, and that this beats back to distortion in the preamplifier section.

In addition, this feature allows the actual AV amplifiers to actually operate two different multi-channel setups in two different rooms, using Dual Speaker Preset Memory as discussed below, since Pre-Amplifier Mode is one of the parameters stored in each Preset.

Pre-Amplifier mode is available in these models: 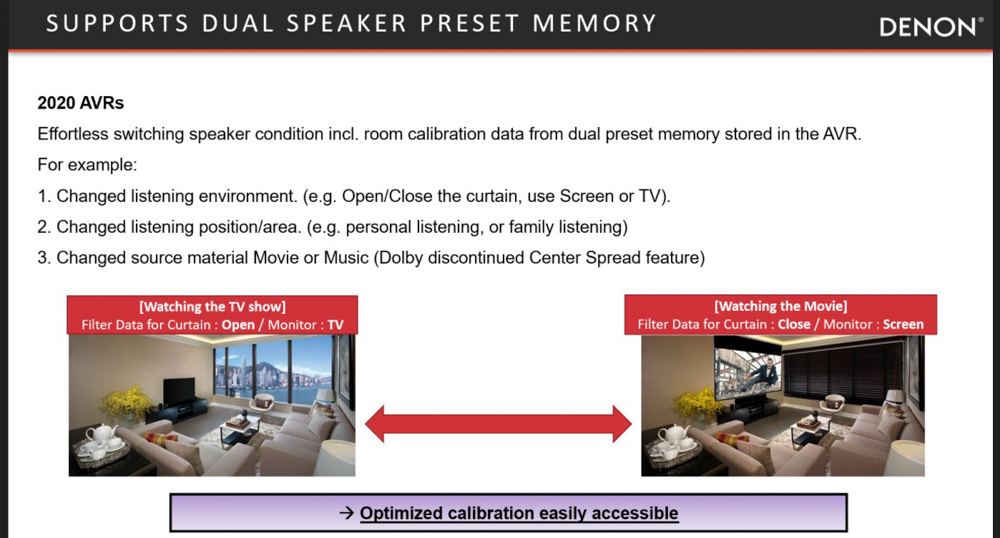 This is a more impotant news than many may realize at first glance. The bottom line is that you have the option of storing two different speaker calibration setups. This should not be confused with the many measurements from different positions happening in Audyssey - all of which are based on one and the same sweetspot.

With Dual Speaker Preset Memory you have the option of storing two different sweets spots. It is useful if you sometimes use an alternative listening position, e.g. from the sofa corner, and would like to get the optimal settings from this position. Or, if you want to store measurements from two different acoustic situations, as with the curtains preferred and from the drawn, which can give a big impact.

This is the first time you can store two different measurement sets in the Denon amplifier itself. In the past you have had a similar opportunity with the Audyssey app in e.g. iOS. But the disadvantage of this method is that it is a bit cumbersome, and usually takes a minute or two to transfer stored data to the receiver or amplifier. With the measurements stored in the amplifier itself, we take it for granted that it is a snap to switch to an alternative set of pre-stored settings. 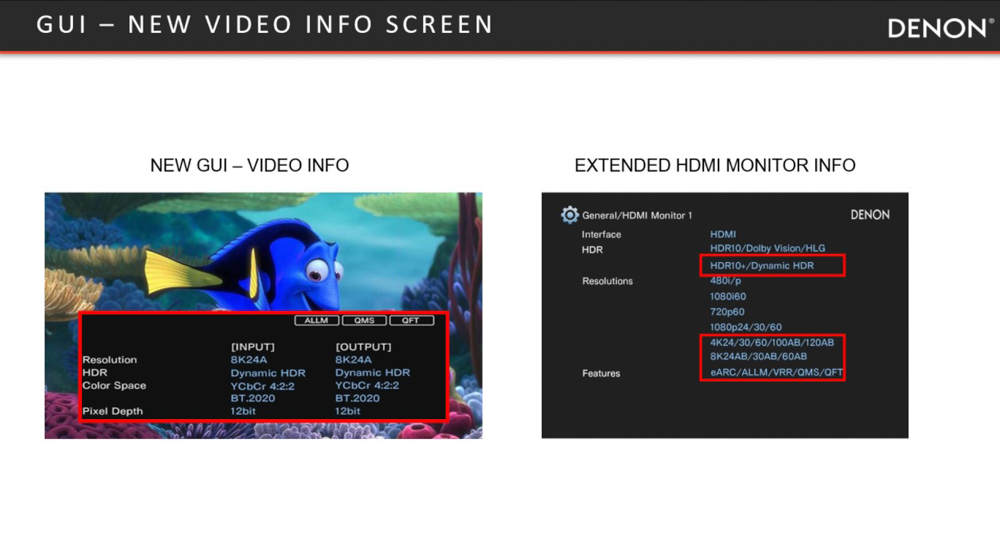 There will also be a new graphical user interface, where Denon paid special attention to improved viewing of video properties. Very usefull if you want to monitor what videoquality you actually get.

Many people get annoyed that the screen goes black for a while when switching between signal of different resolution. This has now eliminated Denon with QMS, or Quick Media Switching. 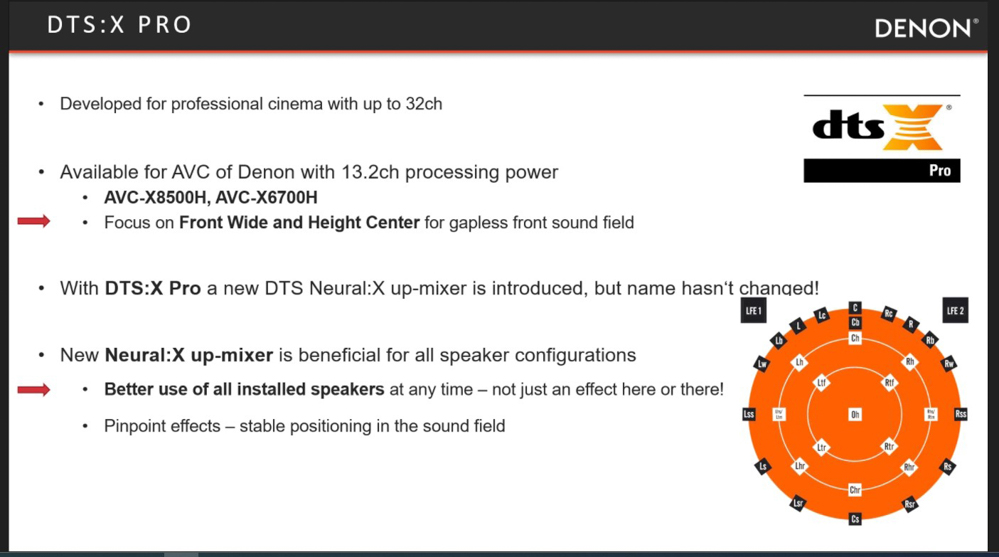 This extreme version of the DTS: X becomes available on the two largest models - AVC-X6700H and AVC-X8500H. This means that the former now also gets a 13-channel processor, much like the flagship model. And according to Denon, thise are the only units on the sount side of Trinnov offering DTS:X Pro!

But the AVC-X6700 still only has 11 amplifier channels, so if you want to take full advantage of all the channels, you have to add on with a dual channel power amplifier.

It is important to note that the DTS: X Pro is fully compatible with the standard DTS: X on the source side, so you can take full advantage of existing Movies With DTS:X, and still enjoy DTS:X Pro.

Better graphics on the backboards

Ease of use is the key word Denon has been concerned about with the new backplates. For here they have cultivated transparency, in that it is a kind of color coding that separates the primary connections from the more subordinate.

These are the models that will be new to Denon's 2020 generation: