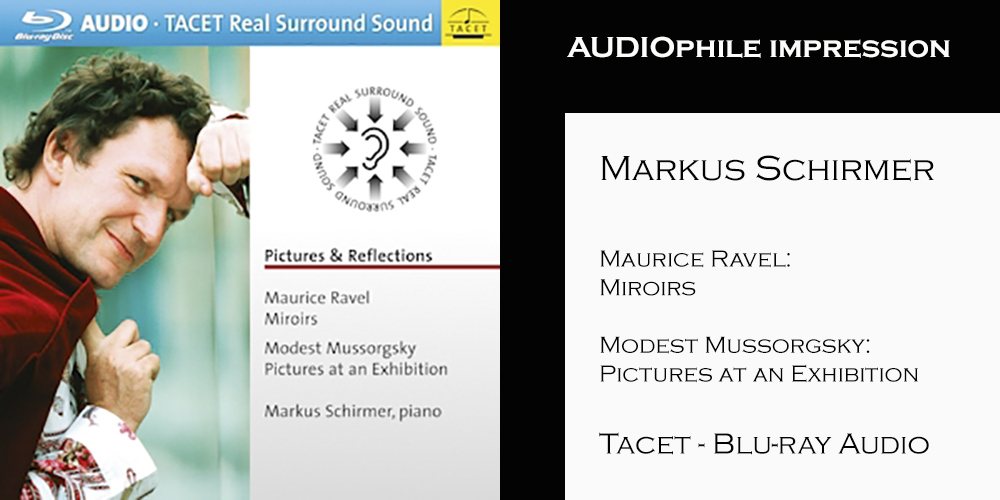 Tacet have reissued the album Pictures & Reflections on Blu-ray Audio. Markus Schirmer has recorded the suite Miroirs by Ravel, and the legendary Pictures at an Exhibition by Mussorgsky. I have been listening to the record.

Pictures at an Exhibition by Modest Mussorgsky is one of the beacons of classical music, and is a work originally written for piano in 1874. The background for this composition was an exhibition to commemorate his friend, artist Viktor Hartmann, who died last year.

But even we have not mentioned the most exciting releases of Pictures at an Exhibition. We start with the prog-rock band Emerson Lake and Palmer, who made a very different - and in many`s ears also successful edition. This was my own first encounter with this work in the early 70`s. Another version that I also became acquainted with in mid 70`s is the synthesizer version from the Japanese musician Isao Tomita. This is a reinterpreting that may be located more towards contemporary, or at the intersection of contemporary and pop/rock.

Back to this recording on TACET, with the Austrian pianist Markus Schirmer. Here we find ourselves of course safely within the classical the performance based on the original scores for Modest Mussorgsky. Or is it now really? Basically, this release is based on a concert in List Halle in the Austrian city of Graz. It is a very lively interpretation, which lies on the border to be characterized as flamboyant! But despite all within a classical interpretation.

But that's before Andreas Spreer introduce his quite unique surround mixes. On the "ordinary" 5.1 mix, we are already far off the track, even for us who are accustomed to quite radical multichannel mixes. Andreas Spreer have chosen to spread the piano from the left surround channel for the deepest bass tones to right surround channel for the brightest highs. And everything between is successively divided into the three front channels. An equally radical mix is in itself far from uncommon, and we experience it often from both TACET, and other labels such as our domestic 2L. But then it concerns several instruments and often an entire orchestra. Here it is after all a solitary piano, and then such an approach is rather unique. The result is that you during the listening experience find yourself in the middle of the piano. My mind goes to one of Frank Zappa`s latest releases Yellow Shark, where we find ourselves inside a piano both verbally and musically. For the works Miroirs and Pictures at an Exhibition, this provides a unique experience, that many of course will dismiss as unnatural. But undeniably provides a unique experience of the compositions.

But we have even a second surround mix on this Blu-ray Audio release. "Moving Surround" is a specialty of TACET and Andreas Spreer, and as the name suggests, it relates to a dynamic mix, where the listener is in motion relative to the instruments. Or vice versa ...

In this case, it is extreme effects that have been applied, but it is important to add that it is very proficiently and accurately. And it is used to provide a kind of geometric support for some of the themes in this piano work. And when the well is supplemented with an occasional use of sound effects, move the entire artistic experience away from the traditional classical interpretation.

And then we are back to the question mark I sat at whether this interpretation is contained within a traditional, classic tradition. And of course it is. Yet it is tempting to define the tracks with Moving Surround in the same category as Emerson Lake and Palmer and Tomita. These tracks give a very different experience than conventional piano recordings with this work.

I regret having put Ravel's suite Miroirs entirely in the shadow of Pictures at an Exhibition, despite Ravel fills nearly half the time on the disc. But I'm not going away emphasizing Mussorgsky, this release is a must for those who appreciate this work. Here we get quite diferent pictures at an exhibition!