Tannoy have very long history with its Mercury Series, the most affordable speakers in a family that has a gigantic range both in terms of size and price. Mercury V1 is located at one end of this spectrum.

My first rendevouz with Tannoy Mercury was approx. 15 years ago. At the time, it was the Mercury M-series that ruled, and especially the youngest - M1 - was championed in both Norwegian and international hi-fi press. However, it was big brother M2 that was my acquaintance, and these have in recent years had the honor to lull me to sleep, and then wake me faithful again at. 6:20 NRK P2, assisted by compact electronics DRA/DRC-102 from Denon in my bedroom system. 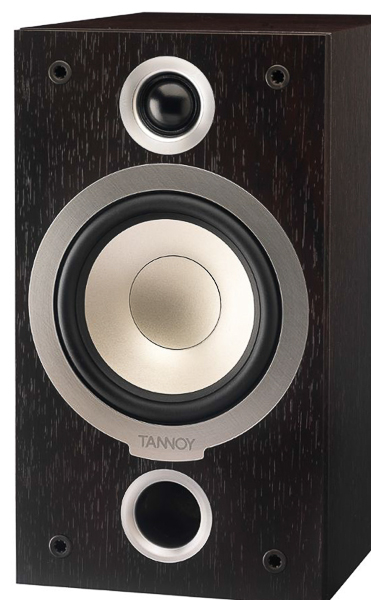 Latest generation of Tannoy Mercury is the  V-series, and now it is V1 that have come into my sphere. This is a compact bookshelf speakerwith dimensions 300x170x254mm, much like the dimensions of the great-great grandfather M1. The coating is a 1-inch tweeter and a 5 inch midrange / bass, divided by a fourth order Linkwitz-Riley filter. Shoebox design with a volume liberating free from curved antics. Simple elegance characterizes the speaker, where pleasing veneer and aluminum details in the front baffle are the main ingredients. My sample is in dark walnut and fits my preferences far better than the alternative in Maple.

Other members of the V-series are floor speaker V4, Center speaker VC, and a pair of speakers reminiscent of V1, but is designed specifically for wall mounting with its shallow depth.

This is bass reflex design, where the bass port is placed in the font. A choice that offers far greater flexibility in positioning than the most common solution to port on the back. It is reasonable to assume that the choices are related to typical location round the thousand rooms. Otherwise, there is just one set of terminals, so those looking excesses with biwiring or biamping must look around in other directions. In return, the terminals have a good quality and is slanted placed in a recessed light well.

In the test setup Tannoy Mercury V1 is powered by countrymen, the somewhat aged amplifier sets from Linn consisting of preamplifier Kolektor and the poweramp LK100. The source Pioneer DV600 is probably definitely the Achilles heel of this setup, which is located in a ca. 25m2 large living room with a significant ceiling volume in my holiday home.

The first and biggest surprise with the sound presented from V1 is how well balanced they are, the small volume notwithstanding. There is very little that stands out - only a very few times it is possible to notice that there is a slight accentuation a place that can be suspected to be in the transition area between the two elements. The most pleasing is that Tannoy has succeeded so incredibly well with the balance of the lower regions. Of course there are limits to how deep bass V1 can play. However, this limitation is by no means dominant. Frequency response is rated at 45Hz to 25kHz, and Tannoy seems not to have been tempted to resort to the ordinary, but the right ear trick to give a lift in the mid bass to compensate for the deepest bass. On the contrary - Arild Andersen's bass on "Live at Belleville" sounds just as natural as it can do. It is only by direct comparison of speaker setup that goes even deeper - as Tannoy their own fantastic Definition DC10T - that one is aware that not everything is complete. In the latter comparison, we find ourselves at 30x the price of V1.

Cæcilie Norby also benefit from the good balance of the Mercury V1 at Arabesque. Vowels are one of the first to be marred by the accent, but the V1 retained grade as the remembered much of the same song material from an intimate concert in the western part of Copenhagen. Her husbond Lars Danielsson get a good presentation, despite the fact that he only has a 5-inch driver to assist him in the bass area.

I mentioned the 15-year-old Mercury M2, and it is of course very tempting to compare these with V1. What has happened in these 15 years, with speakers in the same series from the same manufacturer? Of course, the most appropriate comparison was with M1, but on the other hand, V1 exactly the same price now as the M2 had in 1998, if memory is not playing a trick on me. M2 is a slightly larger speaker, and has a 6.5-inch to take care of the frequency ranges below the treble.

The first difference is that M2 has more, but certainly not better bass response. M2 has a lift in the bass, which - of course depending on room and location - anything goes at the expense of the quality of the bass.

The second, and perhaps more important difference is that V1 is far more refined. Here there is a significantly better precision in the stereo image. Rendered a much clearer photo of the room it is played in, and the instruments' position in this than the M2 had ambitions to explain. It is also possible to capture more detail in V1 than in M2, although it is still safe distance to the far more expensive structures.

I am tempted to compare with some of the Mercury series countrymen. Speakers from Linn had a generational shift a few years ago, materialized by such that stand speakers Katan was replaced by Majik 109 This generational shift manifested a change of personality, from the ever so musically oriented Katan, as stated to the perspective and detail oriented Majik speakers. Similar changes occurred also for the larger models of Linn.

The reason I highlights this perspective, is that I recognize the contours of a similar change also with Tannoy. Mercury V1 is far more analytical than the M2 was, and also more analytical in nature than Linn Katan to 9k, which has been one of my stand-references in 8 years. But still it is not even close to be as analytical as Majik 109 Or that Definition series, taking comparisons in Tannoy's own family. There is of course a sea of ​​difference between V1 and the extreme pin-point accuracy I experienced during the test of DC10T. And it is very reasonable to assume that some of this precision is created by dual-Consentric elements, as confirmed by the more casual listeningsessions I have had the smaller DC-tipped speakers from Tannoy.

Also in comparison with others of my tripod speaker references - Xavian Mia II - provides interesting observations. This tripod speakers to approx. 2.5x the price of V1, so aqny claim of unfair play is accepted. Mia II is quite extreme in precision and micro dynamics, but can in turn be slightly on edge with some recordings. Diplomatic is not an apt description. At these parameters keeps V1 follow a piece, a remarkably long way, I hasten to add. For V1 is eminently well on micro dynamics, the price taken into account, although one should not have any expectations to the major macro dynamic stunts. But where Mia II may seem a bit fussy on some recordings V1 return pleasing way to the finish.

Before setup with Linn amplifiers V1 had a quick lap connected to my aforementioned bed facility with Denon F-102. This exercise illustrates that Tannoy Mercury V1 is able to grow with better electronics. And with its relatively demanding 86dB in sensitivity, I would certainly not rule out that a more powerful amplifier than LK-100 could have V1 to flourish even more. Although V1 is hardly able to grow into the sky. That costs more money.

Tannoy Mercury V1 is a killer bargain. These speakers have no parameter that stands out as very special, but doing a job over the expectation of almost all parameters. Good perspective, detail and micro dynamics do not grow on every tree. Neither one harmonious design, devoid of embarrassing antics. The key success factor, I think that it is well-balanced sound, which apart from skimming only can be criticized for not being a monster of deep bass..

Although we definitely are in the lowest price range, the limit for serious and engaging Hi-fi is  passed by a wide margin. As a pure bonus is growth potential, if you initially connect to budget electronics, and later choose to upgrade. V1 grows with the task .